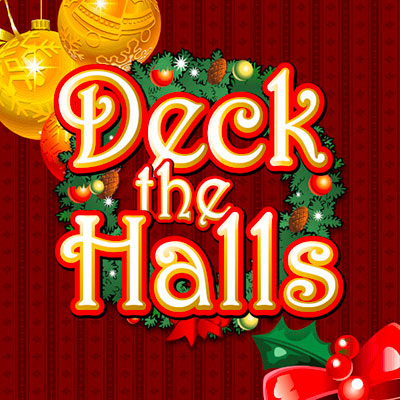 As you probably have already surmised from the title of this online slot. Deck the Halls is an xmas themed online slot from the minds of Microgaming, Deck the Halls boasts 5 reels over 30 pay-lines which is sure to get anyone in the Christmas spirit regardless of the time of year, before you know it you’ll be singing xmas carols and roasting chestnuts on an open fire. Just remember to not get too carried away, there is money to be won and your just the right amount of merry to take it.

Although there is the word ‘micro’ in their name, don't believe for a second that this is a metaphor for the type of developers Microgaming are. With an established catalogue of online gaming titles, Microgaming have proven time and time again why they should be your go too game devs for entertaining experiences of the bright and colourful side.

Deck the Halls features a litany of bonuses that can increase the amount of money earned almost exponentially. It’s not everyday that you see this much detail being put into a title that should only be popular at once time a year but Microgaming have gone all out, offering wilds, stackable symbols, free spins, and bonus multipliers. The appearance of Deck the Halls cannot be sung about enough, there is lots of visually pleasing factors to this title although they aren't that much of a distraction, instead they serve as a way to immerse you in this world, no matter the time and no matter the season.

If you are wanting the big scores then look no further than the Deck the Halls logo when scanning the reels for potential matches, this symbol is Deck the Halls wild and matching it will substitute all other symbols on the reels apart from the bell symbol which serves as the games scatter. The logo can also award players with a pay-out worth 4000x your original starting bet when matching 5 of them repeat succession. Wilds can be later stacked in the free games feature. The Bells are also quite the commodity in Deck the Halls as matching them can give the player up to 15 free games which can in turn make it more plausible for higher cash pay-outs.

There is no doubt in our mind that you will be decking the halls of bows of Holly falalalalalala with this slot. Most Christmas themed titles seem to focus in on a theme, most of the time to their own detriment. An idea may be considered then not fully capitalised on due to a lack of overall self- awareness that plays a very key part in many games in the market. Deck the Halls knows exactly what it is and its purpose, this allows it to break new ground and extend its reach to maybe the players out there who haven't tried an xmas themed online slot before.