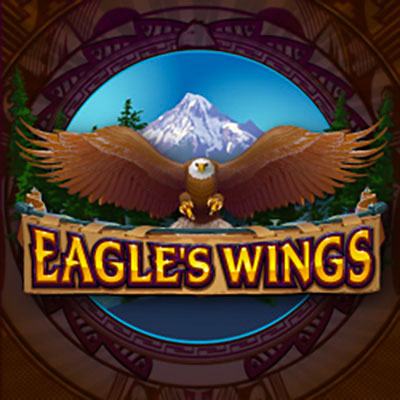 The eagle is the most powerful bird and it’s no surprise that Microgaming had to pay homage to it with their Eagle’s Wings slot. The slot has got 5 reels, 25 winning lines and bonuses like free spins, stacked wilds and some pretty decent animations.

Game symbols stay in line with the eagle theme. They include the card symbols, a gold coin scatter, the eagle’s wings symbol, an eagle motif, a leaping salmon, a pair of hatching eagles, a squawking eagle, and more.

Microgaming has a huge collection of games, including classic poker games like sic bo, baccarat, blackjack and more. However, the main area they focus on is mastering the graphical aspect of their games. Their titles include and well-rewarding online video slots, which range at about 300 of the 600 games they offer. Their slots are available in over 100 online casinos. About 40 of the most successful poker rooms use Microgaming software. This is also why they are known for offering some of the largest progressive jackpots in the gambling industry.

Microgaming has been around since 1994 and as expected, some of its slots like Agent Jane Blonde and Thunderstruck are slowly losing their relevance due to age. The company is also finding itself having to compete extra hard with big shots like Netent who producesome of the most visually entertaining slots.

One thing’s for sure about Eagle’s Wings- it has a veryintriguing design that features shiny golds and bright graphics that set the American wilderness scene perfectly. There’s also a brilliant flow of animations like the salmon diving into a lake every time it forms part of a winning combination or the montage at the beginning which portrays an eagle’s over coniferous forests.

When the game starts, players can bet up to 5 coins per line which makes up a total jackpot of 1,000 credits. This won’t be agame that appeals to high rollers, but they can find comfort in an array of bonus features like;

You’ll need to play with the maximum number of paylines if you’d like to win bigger amounts in the base game from the stacked wilds. Eagle’s Wings is a basic slot that’s going to be easy to pick up, but won’t have excessively big wins. The graphics and visuals will draw you to it, but it may not be exciting enough for you to stay.