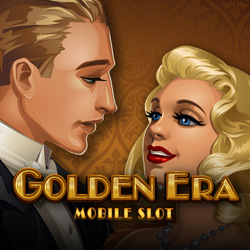 And cut, you did great kid. You won a lot of money here today and we hope that you remember this slot when you're rich and famous, remember the name Golden Era kid, it’s an online slot from the minds of Microgaming, you know Microgaming right? They're the mavericks behind a lot of online slots. Always wanted to do that! Now role playing as a director aside, it’s really time that we discuss this 5x15 online slot because it really is worth the time on your own personal silver screen, otherwise known as your desktop or mobile — depending on exactly how you wish to play of-course.

Microgaming: the record breaking game developers are here and in full swing, ready to give players the types of online experiences you never forget. With titles such as Mega Moolah, Lotsaloot and Major Millions under their belt, it’s plain to see how they have managed to create such a reputation for themselves as one of the go too developers for winning rolls.

As you’d expect with a game that is ripped out of an integral part of history, Golden Era plays to all of those tropes that have helped make that era of Hollywood iconic. Symbols all take the shape of something important to providing an immersive experience that is sure to get a cheer from fans of an era when film was more in-line with creating lasting stories that would go on to inspire the future of pretty much everything on the screen. Symbols for Golden Era are all catered around various trinkets that will immediately make you think about the theme that Microgaming are trying to convey. After doing a tad bit of research we discovered that there a lot of Hollywood based slots out there. A lot of theme seem to only convey this theme in a rather loose kind of way. These games are fun and all but none can hold a candle to Golden Era on a design standpoint as well as a interactivity standpoint.

Once the reels are rolling you will then take the seat of director as you set your actors into winning rows that will see your own personal movie become an instant success. Winning combinations pay-out only from left to right with each symbol in Golden Era offering a different pay-out depending on how many are in the winning line as well as the symbol itself. Wild and scatters are the leading roles in Golden Era, giving the director (you) a lot more options to create some rather winning scenes. Keep an eye out for paparazzi symbols as these are the highest paying out symbols across the board!

Hollywood: where you can get your name in bright lights and even brighter places. In Golden Era you will get to live out the lives of some of the most popular celebrities walking the planet, or maybe just maybe, you’ll eclipse even the brightest stars to become something much more. 8/10