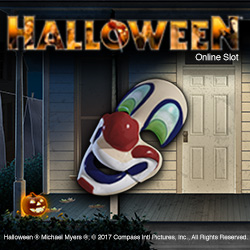 Translating the terror of the 1978 classic film Halloween into a slot game is no mean feat, but Microgaming have brought this classic scarefest back to life.  Watch out for Michael Myers who is as stealthy as he is sinister as you play this five-reel, 50 pay-line slot.  Featuring chilling film footage and possibly the scariest soundtrack of all time, this online slot thrills and chills with the Trick or Treat Wheel, Boogeyman Bonus and Free Spins all waiting in the shadows.

Microgaming are a major name in the online gaming industry with a history stretching back to 1994.  Since then, Microgaming have established themselves as a force to be reckoned with by building a stable of more than 850 games played around the world.  This content includes licensed branded slots like Game of Thrones and The Dark Kinght Rises, as well as original content such as Mega Moolah and Immortal Romance.  This developer is a master of many trades with an almost unparalleled service offering that also includes sportsbook, live dealer and VR games.

The translucent reels are set against the wooden front of Michael Myer’s family home. Setting the mood further still is the soundtrack which is taken straight from the film.  Premium symbols include characters from the movie - Laurie, Loomis, Annie and Lynda - while lower-paying symbols include a knife, telephone and a creepy clown mask.

While there are five traditional reels, there is also a four times three moving reel section which shifts from left to right with every spin.  This segment has giant Jumbo Blocks built into the reels which can result in blood-curdling wins.

Spin three bonus symbols to trigger the Trick or Treat Wheel.  The wheel segments alternate different multipliers with characters from the film.  Keep multiplying your win until you land on a character who takes you through to the next stage of the bonus.

Land on the pasty-looking Michael Myers segment of the wheel to start the ‘pick-a-win’ style Boogeyman Bonus.  Pick leaves to reveal cash prizes and increasing multipliers but avoid uncovering Michael Myers as this scares the bonus away.

If you land on any character other than Michael Myers while spinning the Trick or Treat Wheel you will be able to take a breather from the horrors of Haddonfield with nine free spins.  The character on which you landed will appear more often during these spins and will also be the character featured on the Jumbo Block.

It doesn’t have to be October 31st for you to have a stab at Halloween, the spooky online slot from Microgaming.  Featuring Wandering Wheels with Jumbo Blocks that can result in huge wins and scenes from the movie itself, the base game does justice to the film.  But delve deeper into Haddonfield and uncover the Boogeyman Bonus for multipliers and cash prizes to take your mind off the horror that awaits.