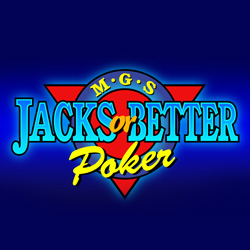 Jacks or Better from NetEnt is one of the gaming behemoth’s most popular online video poker games as it gives players an extra chance to win by paying out a pair of jacks or better.  A quick scan of the pay-table reveals that NetEnt have slightly decreased the standard payouts for Four of a kind and Straight flush hands, but increased the payout for a Straight which gives this video poker game a slight edge over many of its competitors (assuming perfect play).

NetEnt began life in Sweden in 1996 and has been a name to watch out for in the gaming industry ever since then.  They are renowned for their huge portfolio of more than 200 games, as well as being one of the first companies to introduce online casino games for the Java platform.  While a lot of gamers know NetEnt for their video slots such as Scarface, Finn and the Swirly Spin and Planet of the Apes, the gaming giants are just as prolific when it comes to classic casino games.  Budding poker stars can hone their strategy with games including Texas Hold’em, Oasis Poker Caribbean Stud Poker and more.

Jacks or Better deviates from a lot of other online video poker games in paying out for a pair of Jacks or higher rather than starting at three of a kind.  This improved pay-table which marginally boosts the RTP.  The five cards are lined underneath the pay-table and potentially winning hands are held automatically or players can click the hold buttons to change their strategy.

The pay-table goes through all of the possible hands from Jacks or Better right up to the elusive Royal Flush as a helpful reminder.

Players have the option of playing one to five coins per round, though we’d recommend the max bet as this boosts the RTP from 98.40% to a very tempting 99.56%.

Any win can be collected once that hand is complete or players can decide to risk it for a biscuit by clickin on the gamble button and betting red or black on the turn of a card.  This gives you the chance to transform modest wins into a nice little stash.  Winnings can be gambled a maximum of five times (don’t push your luck!).

NetEnt are a leading developer of online games to casino providers, from video slots to online poker and more.  It’s therefore no surprise that Jacks or Better is a well thought-out spin on an old classic.  The layout is simple but very easy to decipher.  Although the altered pay-table gives players marginally better odds overall, the essential strategy remains the same.