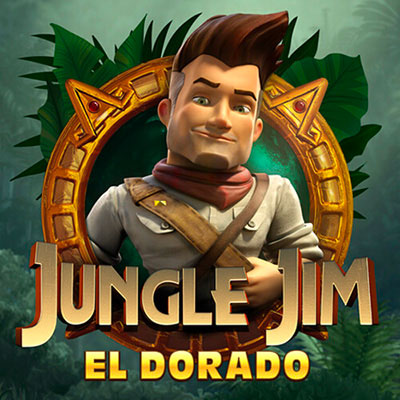 Join world-class adventurer Jungle Jim on an epic adventure to find El Dorado, the lost city of gold, in this video slot machine from gaming industry leaders, Microgaming.  Although the layout of this five reel, 25-line slot might look standard on first glance, the game introduces Rolling Reels - an innovative twist on spinning symbols, allowing symbols to make way for more wins.  The graphics and sound effects are top-notch, with gleaming jewel symbols piquing your hunger for treasure.  Jungle Jim - El Dorado is also feature-rich and includes a free spin bonus with multipliers of up to 15x.

Microgaming began developing games in 1994 from their headquarters in the Isle of Man.  Since then they have established themselves firmly at the vanguard of industry innovation by setting up the first online casino, the Gaming Club and steadily building a portfolio of more than 850 games.  Online gaming fans will undoubtedly have played one of Microgaming’s popular titles which include The Dark Knight Rises, Jurassic Park and the world famous Mega Moolah with its huge progressive jackpot.  Not a company that likes standing still, Microgaming has more recently become involved in developing software for VR headsets.

Grab your map, sunscreen and compass and head on the hunt for El Dorado.  As your trusty chaperone, Jim stands at the lefthand side of the screen willing you along your quest.  The transparent reels are a nice touch, with basic symbols including green, blue and red jewels contrasting beautifully with the shadowy world into which you are heading.  Meanwhile, premium symbols include a treasure chest brimming with gold, a totem pole and a snake.  Jungle Jim symbols are wild and substitute for all other symbols except for the swirly scatters.

The inclusion of rolling reels puts this game at the top of the jungle-themed slot foodchains.  Rather than spinning wins, symbols drop down with winning combinations exploding to make way for more symbols.  This gives players the potential for cascading wins in one ‘spin.’

Fortune favours the brave - especially in Jungle Jim - El Dorado.  There is a multiplier meter at the top of the screen which increases with consecutive wins.  Pile up huge wins with up to 5x multipliers during the base game and 15x during free spins.

Roll three swirly scatter symbols on the first three reels and you will be justly rewarded with 10 free spins.  Not only that but the multiplier trail is supercharged during the free spin round up to a massive 15x.

The appeal of Jungle Jim - El Dorado not only lies in its generous 10 free spin feature with up to 15x multiplier, but also its rolling reels which transforms the playing experience.  The explosion of winning combinations clears the way for cascading wins, pushing the multiplier meter up and increasing the chances of striking it rich with a share of El Dorado’s hidden gold.  Get on the trail!