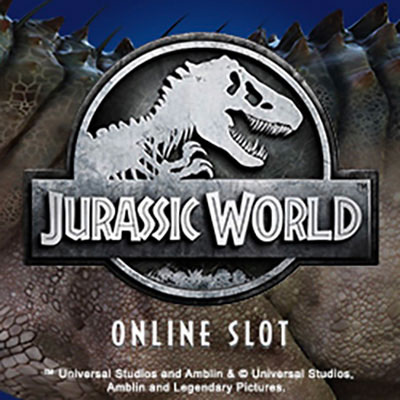 We’ve seen them on our screens, the T-Rex’s and the Velociraptor’s eating people, looking scary, and getting up to general mischief. Now it’s your turn to enter into the world’s most deadly theme park in this Jurassic World slot game.

Based on the 2015 film (the fourth highest grossing film in the world) this slot game was impressively built with high-quality graphics, actual dinosaur animations, and clips from the movie. If that’s not a game you want to get involved in, we don’t know what would be!

Microgaming took on a big task when they decided to run with a Jurassic World slot, as it’s such a well-loved film. Although we couldn’t expect any less, with their franchise for the films – releasing a Jurassic Park slot in 2014, which is also epic, so give it a go if you haven’t already.

Set on a backdrop of the park, this five-reel, three row slot game provides 243 ways to win, with some great bonus rounds to amp up the energy. You’ll see familiar characters from the film, and of course, dinosaurs spread out on the reels. Add to that a victorious soundtrack that inspires heroics (something you could definitely see Chris Pratt strutting along to) and you’ve got yourself a damn good movie slot game.

Indominus Rex feature – this crazy genetically-modified hybrid (we can’t call it a dinosaur as it’s made up from so many different species) can randomly appear while you’re playing a game. It’ll just walk into the middle of the screen and award you a cash prize. The multiplier can go up to 1000x!

Wild symbol – the classic Jurassic Park logo is the wild, substituting itself for any other symbol on the board. Plus, if you land two of the amber scatter symbols they’ll turn wild too. Wilds can also appear stacked.

When you trigger a free spins bonus you’ll be transferred to one of three locations.

The Gyrosphere Valley – remember the tense scene where the kids were in that glass ball and the adults played a very scary game of hide and seek with the genetically-enhanced Indominus Rex? Well that’s where you’ll find yourself in this round, although it’s a lot less scary and a lot more enjoyable – you’ll get 10 free spins and start with a multiplier of 2. For every losing spin, your multiplier will go up by 1, and if you get to the end of the free spins and your multiplier is above 2x, then the round will keep going until you win.

Creation Lab – exactly where they cooked up all of those wonderful monsters, and where you can cook up some amazing winnings. You’ll be awarded with 10 free spins and rolling reels. This means that symbols that create a winning line will keep being replaced by other symbols until you stop creating winning combos. To play to the Creation Lab scene, you can also get cryo wilds, which will stick for at least 3 wins. It’s another free spins round that can go on and on.

Raptor Den – get yourself right into the heart of where those cute (and equally scary) raptors, Charlie, Delta, Blue and Echo live. Here you’ll get 10 free spins and wild scatters – which means that every scatter symbol that you land will turn into a wild. Land three scatters and you’ll trigger 5 more free spins.

A perfectly-designed game that does Jurassic World justice, from the action clips from the film to the amazing animations; this game is more than just a slot game. The bonus rounds are great too, with lots of opportunities to win big. Just another great notch in the Microgaming belt.