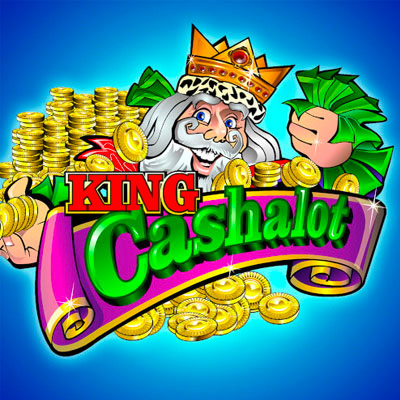 Step back in time to the medieval era, where King’s lived in castles, knights sat at round tables, and princesses were damsels in distress – does that sound too much like a movie? Well, ok, we may be fudging the facts a bit, but it sounds way more fun, which is exactly what Microgaming wants with this progressive jackpot slot game. Become King Cashalot and win all the gold – enough fit for a king!

Microgaming is ahead of the game when it comes to online casino games, they’ve been creating them since 1994. They might not have anticipated quite how popular King Cashalot would be among the casino community, but it has solidified its place, top of the slot games, thanks to its obscene jackpot. Interested in some other Microgaming slot games? Then try some of their movie-inspired games like Jurassic Park and Tomb Raider.

When you play this game you’re immediately hit with the medieval theme – from the upbeat soundtrack to the reels adorned with medieval symbols. You’ve got food items from the King’s banquet as the lower value symbols – ham, chicken, fish, trifle and fruit. Then you’ve got the princess, prince, king and queen, the king being the highest value symbol – match 5 of him in one spin and you’ll get 15,000 coins.

Wild symbol – the king is also the wild, and substitutes for all other symbols on the reels except from the scatter and the treasure. The king will also double your winning payline after he’s substituted himself for another symbol to make up that winning combo. Get 5 of the king on the 9th payline (and play the max bet) and you could even be in with a chance of winning the progressive jackpot!

Scatter – the jester is the scatter symbol, and the wins awarded with scatters are multiplied by the amount of credits you’ve bet. He’ll even pay out for non activated paylines!

Golden dragon – this is the bonus symbol, scattered on reels 2, 3 and 4. Land three or more on any of the reels and you’ll trigger the bonus round where you can choose one of three chests, which will reveal a bonus prize. You can either choose to keep the prize or open another chest (at which point your previous prize is discarded). Plus all your winnings from this round are multiplied by the number of coins and the number of paylines you bet.

Progressive jackpot – this has reached dizzying heights of over 1.7million, but in order to be in with a chance of winning you’ve got to bet the maximum amount on all 9 paylines. You’ve got to bet big to win big!

A tidy little slot game with a good amount of opportunity to win, but the feature that makes this game is the huge progressive jackpot that you can win. Imagine what you could do with that amount of cash – you could become the new King Cashalot!