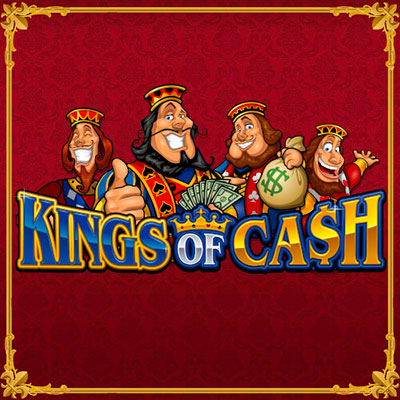 Sitting on a mountain of cash, having been crowned the king of the slots doesn’t sound half bad, especially when we’re given the chance to do it again and again. If you’re someone who loves the shining glimmer of wealth, then Microgaming’s Kings of Cash is a video slot you’ll want to test drive. Dressed up inside a traditional slot machine interface, the old fashioned graphics perfectly translate the idea of medieval kings and queens.

It can’t be said that such conventional themes are among the most popular, but with a little help from the initial bet of 15p, it makes delving into the past much more appealing. Not forgetting that being a king for a day is one of the coolest ways to settle into your couple of hours of down time.

Given the sheer number of titles that Microgaming has created over the last two decades, the developer needs little introduction. They’ve used their expertise to craft a thriving den of casino classics and sportsbook gambling, though its their casino software they’re known for. What they’re renowned for.

Based on the Isle of Man, where the label first began, over 800 activities have been developed, therefore maximising the number of people who can enjoy their games. No matter the type of activities you usually prefer to wager on, Microgaming will likely have an outlet for you in one form or another.

Unlike with more contemporary titles, the introduction to the game is virtually nonexistent, with gamers taken straight to the 15 winlines rather than waiting around. It’s a no nonsense game which’ll work well for those of you who want a quick punt.

The aesthetics remind us of the graphics we used to see when playing old PS1 games, where the edges are undefined. As bitty as the imagery is, there’s a rustic charm to Kings of Cash that draws us into that 3x5 format. In regards to the symbols of the paytable, there’s not all that many of them, however there’s two types of scatter icons that’ll bag you sizeable bags of cash.

To say that this is a number one slot would be a lie to those of you who play it, however that doesn’t mean it’s not entertaining in its own way. As old worldly as the interface and its features are, it allows you an easy means of scoring money via three different means of bonuses.