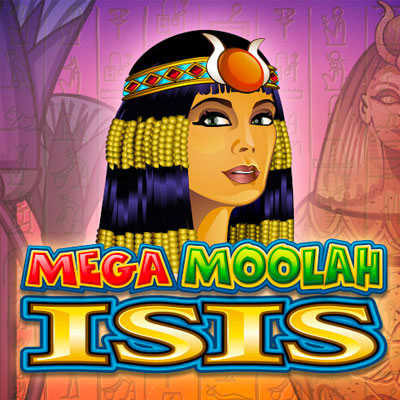 Originals can be tough acts to follow, with many of us seeing the first instalment as the only one that should have been made. We see it time and again in films, TV series, even music; we champion the original but rarely give the sequel a chance. Until now that is, as Mega Moolah Isis is a slot machine sequel worth investing your time in.

Still in-keeping with the original theme, so having moved onto the Egyptian side of the African landscape, this opens up the reels to even more gamers. We can appreciate that Ancient Egypt has been a tried and tested genre, one which some have tired of, but when done right it can ganer much interest. And that’s what Microgaming has managed to do with the 25 winlines of this title.

Microgaming is no stranger to the wonders of Egypt, as they’ve been around for the last 20 years, creating similar themed slots as well as a few others. Well, few is pretty big understatement, as the 1994 founded company has developed over 850 activities. Even with that many years having passed, that number of games is most impressive, especially when compared with other top labels.

Sometimes the titles they create are modest yet hugely popular, like Mega Moolah Isis, while others are epic action packed reels that dazzle with graphics but don’t have the same cult following. Their portfolio is a mixed one, which is what has made them such a household name among online gamers.

In contrast to the original game, this activity has a more muted interface of colours, with us feeling like we’re looking through the dusty sands of Egypt. It could be argued that there’s less personality upon these winlines, but we find that the mix of paytable symbols works well with the aesthetics. It doesn’t overwhelm or take away from the gameplay.

Not that it would be easy for Mega Moolah Isis to downplay the variance it offers, as it’s one of the first aspects of the game you see once you’ve made that first bet. For the majority of gamers, the progressive jackpot is the be all and end all, but this wouldn’t be a fair review without covering all the little quirks of the matrix.

Mega Moolah wasn’t going to be easy to come back from, seeing as how it’s still one of the most played online games. And yet Mega Moolah Isis has done it, while also managing to make its own stamp on the iGaming community. If you’ve played Microgaming’s original, you’re going to want to experience the winlines of this title as well.