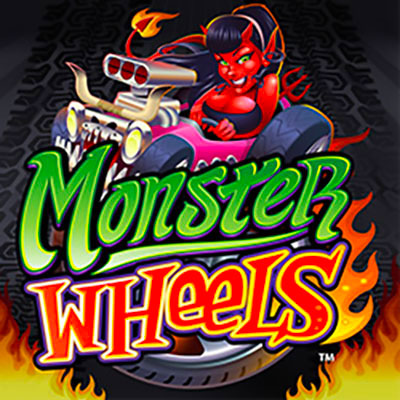 Always trying to stay in pole position, Microgaming have put the pedal to the metal in their petrol-powered slot, Monster Wheels.  The game-board is a little quirky, with five reels on top of some flaming tyres.  Rather than each reel haven’t an equal number of rows, the configuration is instead:  two, four, two, four and two rows respectively.  Drivers can also select whether to play with 128 or 288 win-lines to mix things up a bit.  Players are also given the chance to choose the combination of free spins versus multipliers in the Free Spin round, meaning those of stronger disposition can really put their foot down with 8x multiplier spins.

The name Microgaming is synonymous with the online gaming industry and has been since the company was founded in 1994.  Microgaming set the bar high early on by creating the world’s first online casino, the Gaming Club, and continued to put innovation at the heart of their corporate culture.  When it comes to game portfolios, very few developers can compete with Microgaming’s stable of licensed slots, including Jurassic Park, Bridesmaids, Terminator II and Game of Thrones, as well as original themed games like Mega Moolah (progressive), Immortal Romance and Lucky Leprechaun.  The RTP of Microgaming slots is typically above average, hovering at around 96%.  As well as online slots, Microgaming likes to use the latest technology in developing new services and has recently been working on virtual reality games in conjunction with Oculus Rift.

Monster Wheels is a great looking and sound online slot with flaming wheels and engine growl to set the right tone.  Premium symbols are all the different coloured monsters in their vehicles (orange, pink, yellow, brown, blue and purple), while basic-level symbols are the classic 9, 10, J, Q, K and A which tends to be the case in Microgaming slots.  Scatter symbols are represented by red jerrycans and Monster Wheel symbols are wild, substituting for every symbol except for the scatters.

Land jerrycans on reels one, three and five to trigger the Monster Wheels Free Spin feature.  The game-board disappears in a blaze of fire to reveal a choice of three Free Spin options:

Monster Wheels from Microgaming is a miles ahead of the game with its turbocharged gameplay and high-octane features.  The unusual game-board configuration transforms what could have been run-of-the-mill gameplay into something more interesting.  I particularly like the way the game puts the player in the driving seat, letting you choose, for example between playing 128 or 288 win-lines (although presumably the RTP does not change).  The same freedom is given during the Free Spins round where players can choose the risk/reward ratio that they are comfortable.  This one definitely gets the green light so give it a go!