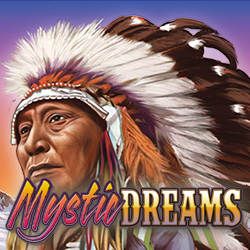 The Native American lifestyle has always been a fascinating subject, hence the reason Microgaming decided to create a slot around it. Filled with intriguing stories typically told around a camp fire, this game takes players to a world dedicated to two things – nature and spirituality. As the title suggests, this slot is all about following your dreams, which shouldn’t be too hard with a good selection of features and bonus rounds, not to mention an impressive 243 ways to win.

In terms of appearance, this is one of the most visually pleasing slots around. Situated in the beautiful snow-topped mountains and overlooked by a glowing orange-purple sky, the game comes with a tranquil atmosphere. This is also exemplified through the calming music, which plays throughout. While, the symbols used have a connection to native culture from eagles to wolves and buffaloes.

Microgaming is the largest online casino software provider in the world. With that in mind, they’re pretty reliable when it comes to their game-play, hence the reason many gamers return to their slots. Their progressive jackpots are another stand-out feature with a good selection of players taking home lucrative jackpots as high as $400 million!

This 5-reel game keeps things interesting throughout, along with its 243 ways to win players will also get to take advantage of bonus rounds and WILDs with multipliers. If you’re wondering what the game’s most valuable symbols are,  you’ll need t o keep your eyes peeled for the eagle, wolf, buffalo and the warrior – the most rewarding icon in the game. That’s right, if players land 5 warriors side-by-side across their reels they’ll secure the slot’s biggest pay out, a jackpot of 2,500 or 12,500 coins. The amount you win will depend on the number of coins you play with.

The WILD in Mystic Dreams is vital to Native American culture, given this is where they lived. Represented by a tepee, the icon replaces all symbols in the game, apart from the SCATTER (a totem pole). The SCATTER comes into play when 3 or more totems appear side-by-side across your reels, players will be awarded with Free Spins. The amount given will depend on the number of SCATTERS landed. This will also trigger the bonus feature. During this bonus feature, WILDs becomes multipliers when they appear on reels 2, 3 and 4. The payout will be determined on the reels they land on, if you the symbol appears on reel 2, your winning will be doubled, if it lands on 3, they’ll be tripled and so.

Mystic Dreams is both fascinating and fun to play. Attracting gamers with it stunning interface and relaxing theme, this slot is certainly worth checking out. And when you’re not focusing on its premium design, its generosity goes along way. Not only does the game come with a RTP of 96.06%, but it also has a wide gambling range. Therefore, it appeals to every kind of player regardless of experience.