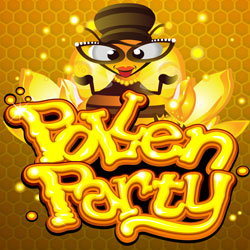 Honey bees are amazing creatures, responsible for pollinating food crops and in turn playing a huge part in the provision of the food we eat every day. In Pollen Party by Microgaming, bees are finally given the recognition they deserve as the game’s theme focuses on a hive of these hard-working insects. Spin colourful reels to see the bees hard at work and keep your fingers crossed for big cash prizes that’ll get you buzzing.

Microgaming was established in 1994 and is now a forerunner in casino game development. Based on the unassuming Isle of Man, the team at Microgaming have designed and produced over 850 unique casino games and a whole host of fan favourites. Thunderstruck II, Big Bad Wolf and Mega Moolah Isis are some of Microgaming’s most popular slots, loved by fans for their imaginative themes and an innovative collection of bonus features that make things extra exciting. Microgaming have won several awards and are a go-to for games that combine great fun, great visuals and great payout potential.

Pollen Party has quite a simplistic look to it, but the graphics are visually appealing and the game is full of bright, quirky symbols. The reels themselves are made up of hexagonal honeycomb shapes, with reels 1 and 5 displaying three symbols, reels 2 and 4 displaying four and reel three having five positions. This 5-reel slot has 720 ways to win, giving players plenty of chances to score exciting cash prizes.

The cartoon symbols aren’t three-dimensional or animated as they are in some other modern slot games but they are colourful and engaging, showing a range of bee characters as well as some other bee and honey related objects. Lower value symbols include honey flavoured cereal, a honey jar and some royal jelly, while higher paying symbols include a worker bee, nurse bee, soldier bee and queen bee, all of whom are relied upon to ensure that honey can be made without a hitch.

There are two different bonus features in this game, which means players have more opportunities to win big.

We are incredibly reliant on the humble honey bee, so we should really show them a little more appreciation. In this game, you can do just that, spinning the reels to watch these fascinating creatures at work while you keep your fingers crossed for cash rewards. This slot is easy to play and loads of fun, with plenty of great honey-sweet bonus features.