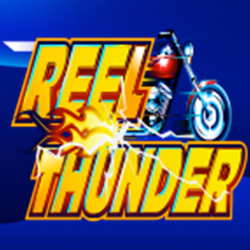 If you want to know what it’s like to burn down Route 66 on a Harley but don’t want to leave the house, then Reel Thunder from Microgaming is probably your next best bet.  This motorcycle-themed online slot features a pig in leathers as its main protagonist which embodies the sense of fun that Microgaming have gone for here.  The vivid game-board is suggestive of a road-trip, with greasy food and badass bikers driving through flames spinning while electric guitar music wails in the background.  Although there are no bonus features, the high RTP and overclocked jackpot make this a game that deserves a run around the block.

In the world of online gaming very few companies continue to be as influential as Microgaming.  With over 20 years of industry experience, from setting up the first online casino in the world to offering live dealer, multiplayer and other features to casino operators around the world, Microgaming remain a force to be reckoned with.  It is likely that most fans of online slot games will have encountered Microgaming’s portfolio of more than 850 games which includes titles such as Terminator 2, Game of Thrones, Playboy and The Dark Knight Rises, as well as progressive jackpot games like Mega Moolah.

As one of Microgaming’s vintage games, Reel Thunder features a simple game-board with inviting cartoonish rendering.  The road-trip visuals are complimented by guitar sound effects that make you feel like you’re on the road or in a diner.  The game is somewhat reminiscent of Supe it Up, also from Microgaming.  If you like Reel Thunder but miss being able to trigger a free spins round then you should give Supe it Up a spin.

The scatter symbol is a shiny engine while the wild symbol is a gleaming heart with golden wings which substitutes for all symbols except for the scatter.  Lower symbols are represented by food items (which all look delicious) including pancakes, bacon and eggs and a hotdog, while premium symbols include a speedometer, a silhouetted biker riding through flames are a hog in leathers - five of which will land you a cool 10000 coins.

As there are no bonus features to speak of in Reel Thunder, this game might not be for everyone.  That said, the looks, sound and feel of the gameplay are surprisingly engrossing.  Plus when you have a look at the nuts and bolts of Reel Thunder you soon realise that there is a lot going on under the bonnet as the RTP is 95.95% and the jackpot stands at a pretty piggish 10000 coins.  If you like motorsport-themed games but couldn’t get on with Reel Thunder, why not try Monster Wheels with its unusual reel configuration or Supe it Up with a high volatility free spins feature, both also from Microgaming.