Stash of the Titans 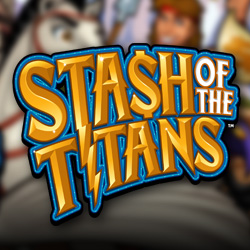 Stash of the Titans draws on the timeless power of the Greek myth of Perseus (adapted into the 1981 film, Clash of the Titans) to bring gamers a legendary online slot.  Developed by gaming giants Microgaming, Stash of the Titans is a five-reel 20 pay-line slot game that others big cash prizes, free spins round with 15 spins and quadruple wins and a jackpot of 500x your stake.  Furthermore, all your favourite characters from the annals of Greek myth have been immortalised in symbol form, including Cerberus the three-headed dog and a rather fetching portrayal of snake-haired Medusa who promises big wins to those who dare face her wrath.

Microgaming have been in the online gaming industry since the beginning when they helped to set up the world’s first online casino.  As well as boasting an online portfolio of almost 900 games, Microgaming have had a big hand in almost every area of online gaming including sportsbook, multiplayer, VR products and live dealer games.  The myriad of slots offered by Microgaming caters for every possible taste, from action classics like Terminator 2 and Jurassic Park to original progressive slots like Mega Moolah.

Although the theme is epic, the graphics are rendered in a cartoonish style that brings an element of fun to the action.  The audio is a blend of military ceremony and gentle lute playing that gives Stash of the Titans an authentic feel.

Symbols are plucked from ancient times and include the Minotaur, Cerberus (the vicious looking three-headed dog), Pegasus the flying horse and a stuffed treasure chest.  Players will also be paid for spinning combinations of Pegasus symbols and treasure chests.

Stash of the Titans symbol with their Zeus lightning bolt ‘i’ are wild and substitute for all symbols except for Medusa scatters.  Landing more wild symbols will multiply your winnings up to 10x.

Spin three or more flirty Medusa scatters to trigger the Free Spins round.  You will be granted 15 free spins, each with a 4x multiplier for potential titanic wins.  Not only that but you’ll also be paid out for the number of scatters in view as follows:

Although Clash of the Titans is inspired by the distant past, it has been optimised for mobile and tablet devices too.

Step back into the age of antiquity with Stash of the Titans from Microgaming. Based on the myth of Perseus, the great slayer of monsters, this slot invites players to take on Medusa to trigger a Free Spins round that rewards bravery with 15 free spins each with quadrupled wins.  With a jackpot of 500x stake and an RTP of 95.07 players can scoop some epic wins.