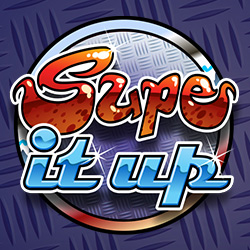 Get in the fast lane with Supe it Up, a petrol-powered car-themed online slot from gaming supremos Microgaming.  Sometimes appearances can be deceptive, but that’s not the case with this five-reel, 25 pay-line game.  The colours are bright an the action is fluid but this is an old-school game that does what it says on the tin.  That said, the smooth action and generous high variance Free Spins feature means that Supe it Up definitely deserves its place in the fast lane.

Microgaming are a major name in the online gaming industry with a history stretching back to 1994 when they helped to develop the world’s first online casino:  the Gaming Club.  Since then, Microgaming have established themselves as a force to be reckoned with by building a stable of more than 850 games which are played all around the world.  This content includes licensed branded slots like Game of Thrones and The Dark Knight Rises as well as original content such as Mega Moolah and Immortal Romance.  This developer is a master of many trades with an almost unparalleled service offering that also includes sportsbook, live dealer and VR games.

Supe it Up takes the concept of a car-themed online slot and steps it up a gear.  Microgaming have kept it simple and streamlined with bright colours, a dashboard style interface and sound effects that will have you reaching for an invisible steering wheel.

As with many Microgaming slots, the lower-value symbols are represented by 9, 10, J, Q, K and A, while premium symbols are mean-looking cartoonish motor vehicles in different colours. The shiny red ‘Wild’ symbol substitutes for all other symbols except for the loudspeaker scatters.

Land three or more speaker symbols to get the party pumping with up to 30 free spins.  All winnings during the round will have a very generous 6x multiplier applied so there’s a chance you might be able to trade in your old banger for something a little sportier (particularly as Supe it Up is a high variance game).

Another old-school feature of Supe it Up is the gamble option.  Every win can be collected immediately or gambled on the turn of a card.  Try to predict the colour or suit of the next card to win 2x or 4x your winnings respectively.

Supe it Up is a nicely decked out online slot game from expert developers, Microgaming.  The theme is executed well in the dashboard-like visuals which are well complimented by engine sound effects.  As this is a high variance game small wins may be few and far between, but the Free Spins feature is turbocharged with up to 30 spins, each with a 6x multiplier up for grabs.  Fans of Supe it Up might like to give Monster Wheels (another one of Microgaming’s car-themed slots) a test-drive too.