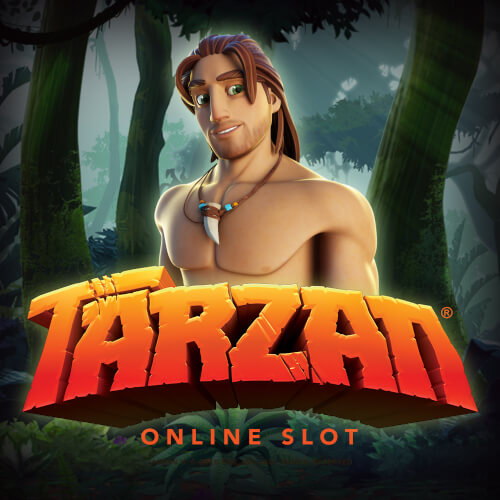 Surely, you’ll have heard the story – kid’s mother dies, kid gets adopted by an ape, kid thinks he’s an ape, kid becomes a King of the Jungle, kid (now no longer a kid) falls in love with marooned human Jane… hilarity ensues. That, in a very small nutshell, is the story of Tarzan.

Delve into the depths of the African jungle for an adventure with none other than the loveable Tarzan, in this exciting slot game by Microgaming.

Microgaming are the dons when it comes to game developing – they’ve been at it for over two decades, and they put their heart and soul into every game they create. Developing games for different tastes, they have a varying portfolio, which demonstrates their skills and their aptitude for modern game development. They’ve grown through the ages, and you can find other games just like Tarzan in their repertoire. Why not give these a try?

This game has 40 paylines, 5 reels, and 4 rows, and is full of jungle symbols like a monkey, a leopard, Professor Archimedes, and an exotic bird – mix that up with some tasty fruit and you’ve got a nice-looking set of reels.

Wild symbol – the Tarzan logo is the wild symbol and can substitute any normal symbols on the reels, and it can increase your winnings if you land them on a winning payline. The wilds can also appear stacked on the reels which gives you more of a chance of winning extra combinations.

Scatter symbol – comes in the form of a wheel if you land 2 or more of them, and the wins are then multiplied by your total stake bet. Land three or more of the wheels on the game view and it’ll trigger the Bonus Wheel feature.

Bonus wheel – this will get you one of four bonus rounds: free spins, pick-a-potamus, cash prizes or the jackpot.

This game takes you back to your childhood dreams of excitement and wonderment when watching Tarzan and wanting to be part of his world. It’s an easy game to play, with some fun little bonus games thrown in there for good measure. Definitely a game that you could play again and again.