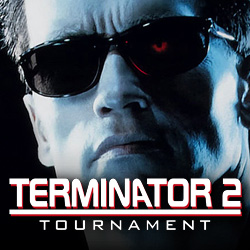 Always take The Terminator at his word, especially when he says he’ll be back – because here he is, back in top form in this 5-reel slot game, with an epic 243 ways to win. Take yourself straight into the hit blockbuster film Terminator 2: Judgement Day in this slot game, where you’ll find familiar characters, and impressive animations. It’s the Terminator, it can’t be anything less than impressive, really.

Microgaming offers tons of themes to online casino players, and has been creating entertaining and innovative games since it was founded in 1994. If you’re looking for other film-inspired slot games like Terminator 2, then Microgaming won’t disappoint:

This game is definitely for the Terminator fans out there – it’s got the graphics down to a tee, and even plays some of the clips from the film to get you really psyched up! It’s a 5-reel slot, with 3 rows and 243 ways to win. Wait for the free spins round and you’ll get 4 rows, increasing the number of ways to win up to 1024!

Wild symbol – this is in the form of the T2 symbol, it substitutes itself for other symbols (except scatters) so that it can make winning paylines, and if you find 5 on the reels in one spin then it’ll multiply your bet by a whopping 1,500!

Free spins – triggered by three or more scatter symbols, the free spins round will add a row to the playing reels, increasing the winning dramatically. In the free spins round, the T-1000 icon will act as a wild and will substitute itself for any other symbol on the reels to give you the biggest possible win.

T-800 bonus – this is randomly triggered whenever you have an unsuccessful spin (so even the unsuccessful spins aren’t always unsuccessful), this puts the slot game into robo-vision and assesses each character before awarding bonus wins.

Although not always the most rewarding game financially, you can get some great wins in the free spins and T-800 bonus rounds – it takes a patient slot game player to reap the rewards. But if they’re a Terminator fan like they probably will be, they’ll spend their time being entertained by the graphics, the music and the film clips that will probably make them get out their DVD afterwards! They’ll be back, for sure.