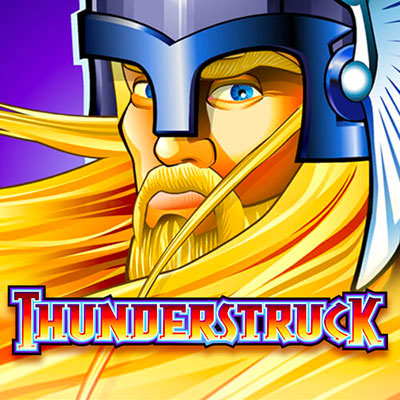 Take cover, the Nordic God of the stormy skies is raining down thunder and lightning in this legendary Microgaming classic, Thunderstruck. We are of course, talking of the mighty God Thor and his signifiers run through the theme of this online slot game. On the reels, we are graced by Thor himself, his hammer, rams, his mighty fist, a horn and a storm covered castle. Get ready to smash Thor’s hammer as you play this online casino favourite, Thunderstruck.

Microgaming are a force to be reckoned with in the online casino development industry. They eat, sleep and breathe online gaming and their commitment shines through in their user friendly and visually compelling titles. Since 1994, they have provided game after game at the highest quality and have really set the industry standard. If you love the legendary Thunderstruck, why not try some other Microgaming greats.

This game takes us back to the Viking ages of the Norse mythological Gods that ruled both the Heavens and the Earth. Thor is the son of Odin and the strongest of the Norse Gods. He reigns over thunder and lightning, oak trees, strength, storms and fertility, as well as being the protector of man-kind. The well-known weapon of Thor, which is of course his hammer, was known in Nordic mythology as the most fearsome and powerful weapon ever created. The hammer was enchanted by Odin so that only one who is worthy could ever wield. The tale was picked up by Marvel Comics and re-imagined as Thor walked the Earth again in the form of Chris Hemsworth, bringing thunder and lightning back to the forefront of the cinema experience.

This online slot game invites us in to the stormy world of Thor, but don’t worry, it won’t leave you quaking in your boots as it is very simplistic to get to grips with.

This game, inspired by the ancient Gods of old, is a classic. Its simplistic style and inviting theme makes it accessible to all players and we guarantee you will find yourself hooked while Thor’s hammer smashed through the thunderous skies.