Titans of the Sun - Hyperion 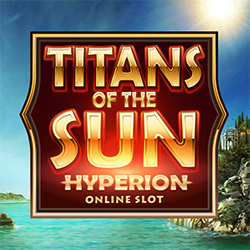 If you have a hankering to be whisked back in time to the sun-drenched world of the Greek Gods, then here at 666 Casino we think you ought to try playing Microgaming’s Titans of the Sun Hyperion.

This 5-reel, 15-payline video slot is set against a spectacular Mediterranean coastal backdrop, complete with stirring soundtrack and crisp HD graphics. Linked to Microgaming’s other Titans slot, Titans of the Sun Theia, this video slot features Hyperion as its central hero.

To find out more about how to play this thrilling online casino games, read on!

About Microgaming - developers of Titans of the Sun Hyperion

Microgaming is one of the dominant developers in the online casino industry, having produced many famous online slot games, including a number of branded epics.

Based on the Isle of Man, the company prides itself as being the pioneers of online casino software and mobile casino software. In addition, Microgaming boasts a record-breaking progressive jackpot network.

Titans of the Sun Hyperion Gameplay and Symbols

As symbols, you will find the usual lower paying cards, as well as stunning higher value symbols such as the hero Hyperion himself, a majestic phoenix, and one of the wild steeds that pulls his chariot across the azure Mediterranean skies.

The game’s scatter symbol depicts two dancers, and there is a mystery symbol represented by a sun.

Titans of the Sun Hyperion Bonus Features and Free Spins

This exciting slot game has a few special features, linked to some of its higher value symbols.

For example, the Hyperion symbol has the potential to stack on all reels and provide some truly fantastic payouts, while the mystery sun symbol can magically transform at random into a particular low or high value symbol during baseplay. During the game’s free spins round this symbol can also substitute for the wild to help produce more winning combinations.

Last but not least, three or more of the dancer symbol will trigger the slot’s free spins round. You will be granted 15 free spins, with the potential for respins if you land more scatters.

Our Verdict on Titans of the Sun Hyperion

There can be no doubt that, if the weather is particularly chilly and grey outside, this is the perfect slot to play to bring you sunshine and thrills and make you forget all about the gloom. Because of its medium volatility, it is also ideal for both newbies and more established players, and those special symbols manage to keep gameplay thrilling and fun-filled throughout. Best of all, you have the opportunity to score some pretty substantial wins.

Find more fantasy-themed slots like this one, as well as a host of other thrilling online casino games, right here on 666 Casino.