Titans of the Sun - Theia 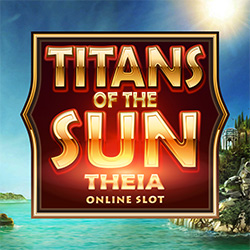 Microgaming are a gambling industry pioneer, they bring that cutting-edge mentality to everything they do, which is why we know to expect Titans Of The Sun Theia to be fantastic. They released this slot game back in 2015. It is built with a playboard consisting of 5 reels and 3 rows.

This Ancient Greek god themed slot game has a total of 15 paylines, which play with a medium volatility and has an impressive RTP of 96.67%!

With a medium betting range, starting with min bets of £0.15 going to a max bet of £30, there is space for most players. With such a good RTP and a max payout of 600,000 times the initial stake, there is little reason to pass on this slot game!

Titans Of The Sun Theia Theme and Graphics

Titans Of The Sun Theia graphics load up at 666 online casino. We can see a beautiful vista, there are two rocky mountains either side of the screen, each scattered with traditional Greek archetechture. Beyond the two peaks there is a serene ocean stretching out endlessly.

The playboard has a regal and intricate golden detailing. There are 3 high value symbols, Theia herself, who always comes stacked in twos. There is also a flaming horse and a phoenix. In addition to those symbols, players also have the standard card deck values: 10, J, Q, K, and A.

Titans Of The Sun Theia's theme and graphics

If you like the sound of Titans Of The Sun Theia slot, then you'll love these casino games too!

How to Play Titans Of The Sun Theia

If all of this has got you ready to search for the riches that the gods covet, then the next step is to get signed up. Becoming a registered member is a quick and simple process, taking less than fives minutes. Just follow the steps below:

After becoming a fully registered player, it is time to let Titans Of The Sun Theia spin! We have put together a step by step guide on how to play this slot game below:

Unfortunately, there is no Titans Of The Sun Theia autospin feature. But that simply means that players get to have a greater level of control while they enjoy this beautiful slot game.

Titans Of The Sun Theia Data

RTP – Titans Of The Sun Theia’s RTP is 96.67% which stands a cut above most slot games on the market! This means that statistically speaking for every £100 gambled, the player will have £96.67 left.

Volatility – This slot game plays with a medium volatility, so players should expect semi-frequent wins, but with an aim to make their main wins from accessing Titans Of The Sun Theia bonus features.

Paylines – In this slot game, players have access to 15 paylines, which are calculated from left to right after each spin is complete.

Reels – Titans Of The Sun Theia comes with the industry standard setup of 5 reels with 3 rows on each.

Wilds and Scatters – There three symbols to look out for.

Maximum Payout – Titans Of The Sun Theia has a maximum payout of 600,000 coins which can be won during the free spins bonus round.

Titans Of The Sun Theia stats

Microgaming have decided to keep things simple, stripping the bonus features back to two key features, both which give us some serious benefits as we try to take the riches of the gods!

During the base game the Mystery sun symbol will transform into any high or low symbol. However, in the free spins round this bonus symbol can also transform into a wild!

Unlocking the Titans Of The Sun Theia free spin round requires players to land 3 or more scatter symbols, this awards players with 15 free spins. The symbol is two people floating in the air, clouds behind, just on the edge of kissing.

During the free spins bonus round, players are able to retrigger this bonus feature.

On top of having access to free spins, there is also Titans Of The Sun Theia multiplier paid out a minimum of a 2 times multiplier. The more scatter symbols that unlock the round will increase the multiplier with a maximum multiplier of 100 time the award value when players land 5 scatter symbols!

Titans Of The Sun Theia is an incredibly well crafted slot game, the grahpics are truly stunning especially when considering that it is 6 years old! Microgaming are known for some of the best slot games on the market, this was simply another slot proving they know what players love.

The bonus features are perfectly integrated into the gameplay to avoid a loss of flow and enjoyment, each moment of this slot brings pure excitement!

Here at 666 Casino we rate Titans Of The Sun Theia a 7/10 slot! Make your first minimum deposit of £20 and get a deposit match of up to £66 bonus cash as well as additional bonuses for the following 6 deposits!