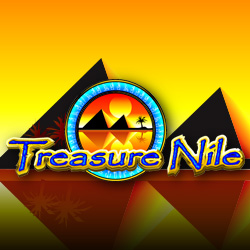 Step in to the land of the Pharaohs, where mighty civilisations were created, with towering pyramids and gargantuan statues tower high above your head. This game invites you to experience ancient Egypt in all its glory, with its papyrus reels and pyramids and jump aboard Egyptian river boats and float down the Nile as you spin. The graphics and sound effects will immerse you into the game, as though you are walking through Giza under the towering Pyramids. This Microgaming online slot game features scarabs and sphinxes and will keep you coming back for more, so get ready to walk like an Egyptian as you play Treasure Nile.

Microgaming are known for their top-quality gaming solutions and for providing engaging gaming that can stand the test of time and keep players interested and coming back again and again. Two decades of experience put them in a leading position and they shine brightly as innovators of the industry. They have hit another home run with Treasure Nile and if you enjoyed it, check out these other Microgaming titles:

The most impressive and indeed most famous ancient Egyptian pyramids in existence are those found at Giza, just outside Cairo and these structures are among the largest man-made structures ever built. These Pyramids were built as vast tombs for the highest-ranking royalty in Egyptian society, the Pharaoh. These ancient kings were buried in solid gold sarcophagus’s and the tombs were often laced with treasures, clothing, paintings and weapons, all of which were thought of as being useful for one entering the afterlife. Their cats were also known to be buried with them, often alive, in order to ward off evil spirits that may haunt the tombs. Pharaohs were treated like Gods and had vast wealth accumulated that they would enjoy both in life and in Death.

Now it is your turn to enjoy some if the Pharaohs wealth as you play this online casino slot, Treasure Nile. Follow the rules of ancient Egypt to secure big wins.

This ancient Egyptian journey down the river Nile, to seek the Pharaohs treasure, is a simple yet enjoyable slot game from Microgaming. Players who love the Egypt theme will love playing this game and keep spinning for big wins on the Treasure Nile.