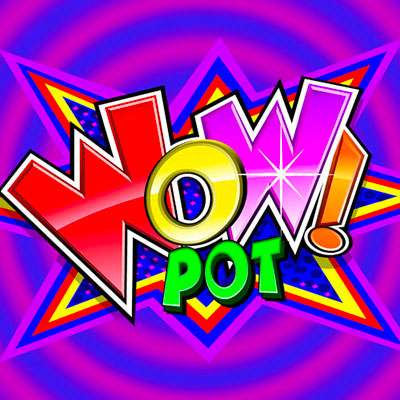 Wowpot is an old school Vegas-style online slot that does away with frills in favour of fast action and a potentially life-changing progressive jackpot.  The three-reel, one pay-line setup is aesthetically pleasing and clear, with the ‘Wow! Pot’ graphic given due prominence.  As with many slots of this ilk, Wowpot really comes to life when you up the stake to three coins.  This makes the Wowpot symbol wild, which doubles or quadruples wins, as well as giving you a shot at winning the wow-inducing progressive jackpot.

Microgaming are one of the best-known and well-loved online gaming developers with a huge portfolio of more than 850 games.  Based in the Isle of Man, Microgaming are renowned for the quality and innovation that they bring to the online gaming world.  They have paid out a total of more €820 million in progressive jackpots so far and continue to wow punters with games including progressive jackpot giant, Mega Moolah, Game of Thrones and Playboy - meaning there really is something for everyone.  Not only are Microgaming online slot supremos, but they also run the MPN, one of the longest-running online poker networks, as well as bingo games with physical prizes and a whole lot more.

For online gamers who want the chance of snagging a tidy progressive jackpot without having to navigate their way through bonus rounds, Wowpot is an ideal entry into the world of online slots.  The visuals are appropriately simple with authentic slot sound effects.  Microgaming have reflected Wowpot’s traditional theme in the choice of winning symbols which include:  candy-striped sevens, red sevens, triple bars and cherries.

The Wowpot Symbol is the star of the show in this game as it becomes wild when you stake three coins a spin.

One Wowpot symbol anywhere on the win-line will bag you 10 coins, while two wins 20 coins.

Complete a winning combination with one Wowpot symbol to win a 2x multiplier or two symbols for a very tasty 4x multiplier.

Playing on three coins also gives you a chance progressive jackpot (which you can watch accumulating in the dot matrix counter above the reels) can only be won while spinning three coins.

Sometimes good things come in small packages.  This is very much the case here with aptly named developers ‘Microgaming’ and their traditional Vegas-style slot, Wowpot.  Although gamers looking for slick animation and multiple side games might be better served with slots like The Dark Knight Rises or Jurassic Park, Wowpot definitely has a retro appeal that will find a niche.  The highlight of the gameplay is the Wowpot wild symbol that comes to life when you stake three coins.  We would definitely advise playing on max stake to maximise your odds and squeeze the most out of the relatively low RTP of 89.63% that you can.