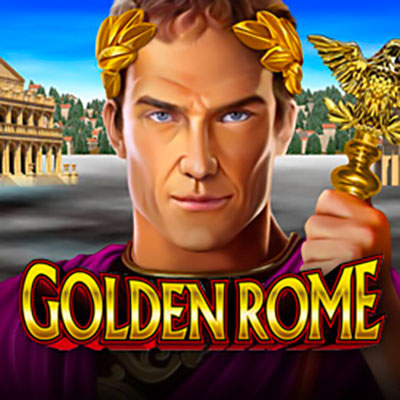 Ancient Rome seems to be a very popular theme for certain slots out there. The Romans are synonymous with gold and luxury which is probably why it is used so often. Don’t get this twisted, we’re not complaining, we just think that it’s important to point out that with so many of these games in the market, there will be weaker and stronger versions of this theme. We are proud to confirm that Golden Rome falls into the latter, offering a lasting experience that sticks with you even after you’ve stopped spinning the reels.

Golden Rome is a very immersive experience, allowing players the chance to live in that aforementioned life of luxury from the comfort of their own home. Everything from graphics to gameplay, it all serves a specific purpose in keeping you fixated at the screen at all times. Symbols in this slot also carry this motive, taking the shape of a variety of different Rome-related pieces. Symbols include: Caesar, gold coins and helmets among others. This slot is played against the backdrop of a Roman town that is rife for historical reference and intrigue. The sounds that emit when players win on the reels is very good at encouraging repeated wins.

From Argentina, we welcome Leander Games: a future staple in the online gaming industry, mark our words. Their path to notoriety began in 2008 with the inception of the developers. Since then they have created some of the most entertaining and bright games we’ve ever seen. Just what will they think of next? We don't know but can’t wait to play it.

This is a 5 reel game that is bolstered by the 40 pay-lines that accompany it. These pay-lines are fixed allowing for one to experiment with different styles in order to find the best way to play. Bets can be placed from as little as 1 pound to around 10 pounds per spin which is quite low when you think about it. With that in mind, you could say that this is a slot catered towards those that enjoy a basic game and don’t have to put lots of money down.

Golden Rome features an autoplay mode that can keep the action rolling like a horse-pulled chariot. Simply select how many games you’d like to spin and let the computer do all the talking for you. If players are wanting to get the highest possible pay-out, then they will be wanting to manipulate the wilds and scatters in order to conquer this slot.

Golden Rome is a very immersive experience trust us. We lost count of how many times we stopped to check that we aren’t in ancient Rome in-between spins. Leander Games have done a great job here, crafting a slot that is going to keep a lot of players out there occupied for hours on end. We can’t recommend this slot enough, play it out for yourself and discover a truth you never knew you wanted. 8/10