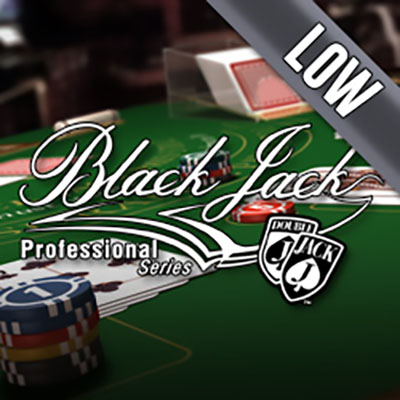 Enjoying a casino classic is a form of entertainment that few of us actually get to savour due to us fearing that we’re too inexperienced. After all, we don’t want to play a difficult game when we’re certain we’ll lose money, and so we tend to avoid such titles instead of playing them. However, that doesn’t have to be the case from now onwards, thanks to Blackjack Pro Low Limit.

As the name suggests, this provides lower limits for customers, therefore ensuring a less costly experience; think of it as an introduction to the infamous Blackjack. To show you the difference in cost, Blackjack Pro requires a minimum wager of £1, while this low limit version asks for just 10p. Talk about a big difference!

For those of you who aren’t aware of the brand of developer responsible for this title, that falls to the 20 years old NetEnt. As a lot of avid online casino fans will know, from experience more than likely, they’re a hugely successful label, known primarily for their slot machines. Although this is the case, they’re released a professional series of activities, designed to give you the full casino experience.

Seeing as they’ve grown into such a large brand, it goes without saying that they have international appeal, with their products played throughout Malta, Poland and Sweden, to name just a few of them.

The game begins with the table of the Blackjack dealer, with your fellow players and said dealer out of sight; it gives us a first person point of view. With cards to the front of you, and chips on your side of the table ready to play, you can begin placing the chips whenever you’re ready.

Due to the dynamics of the game, there’s little in the way of special features, unless you count the double up option when you deal. Once the cards have been drawn, you can hit, stand, rebet or start a whole new bet. What is more, you’ll be able to turn on Fast Play for when you need the quickest playthrough possible, although in doing so it makes it less realistic.

When it comes to any conclusions of this Blackjack Pro Low Limit activity, we’d still argue that it’s a game designed for those that understand what Blackjack is about. And this is even in spite of NetEnt advertising it as a game for the most inexperienced of players. Though, of course, by opting to play a freeplay option, you can avoid wasting any money as you iron out your mistakes.

Should you eventually feel that the low limit is of no use to you anymore, you can switch to Blackjack Pro, or perhaps one of the other professional titles that NetEnt offers alongside it. Not forgetting that there’s also video slots you can try out as well, if the simple dynamics of a more casual game interest you.