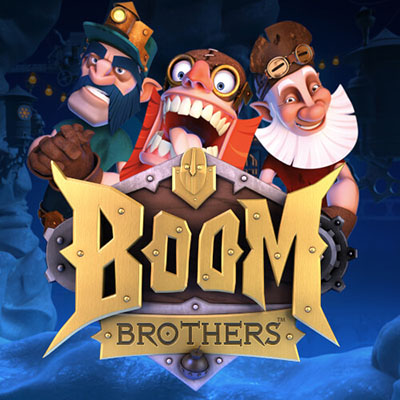 Do you remember Disney's classic 'Snow White and the Seven Dwarves?', where you see all of them mining for precious diamonds underneath mountain sides? Wouldn't you love to mine for your own diamonds on a 5 reel slot game, along with many more prizes and bonuses that can you can win instantly on a matching combination?

Wouldn't you also like to see what it'd be like to mine as a dwarf for at least one hour on your mobile device? Thanks to the people behind NetEnt, an online slot game called Boom Brothers was released not so long ago for iGaming players that want to experience what it's like to make big winnings under The mountain.

Instead of having 7 dwarves in the game, you have 3. And instead of using pickaxes, you use loads of TNT which lightens up your screen with a bang!

Out of all of the renowned iGaming developers that produce and publish a variety of casino games for players to revel in, NetEnt is among the great few that are classed as a leader in the industry. After spreading its wings and expanded its market from Stockholm, Sweden, they rose to fame and marked their place as one of the top gaming developers for casino suppliers before the year 2000.

Their state-of-the-art technology, imaginative narratives, and intense graphics are what made their other games like highly reputable in markets today. If that doesn't impress you enough, then maybe knowing that they operate in Gibraltar, Ukraine, and Malta will make you have a change of heart!

To really get you into the mood of the game, the slot starts off with a cinematic intro, where you see one of your crazy brothers, the red-headed dwarf, setting off a couple of dynamites after putting on a big, cheeky grin and speeding up the mining process.

Some of the base symbols with low values that will appear on the reels come in the form of the traditional objects that you would use while mining for precious stones. A miners helmet, a bucket with a crack in it, a cross made up of a pickaxe and a hammer, and a dimly lit lantern.

The base symbols with high values come in the form of the muscular, heavily bearded dwarves in metal, which come in the colours Brown, green, orange, and white. There aren't any particular WILDS that you should look out for in the steampunk-themed slot game, but there a few special symbols and features that could appear on the reels and give you big winnings at the end of each spin.

The BONUS FEATURES and rounds that you can receive during the base spins are what give Boom Brothers that dynamite effect to the video online slot game. It's one of NetEnt's products that are quite limited on WILDS and SCATTERS that help give casino players more chance of making big winnings, but the sharp graphics, smooth gameplay, and high RTP rate of over 95% fill in the gaps and make you play this game for hours on end!