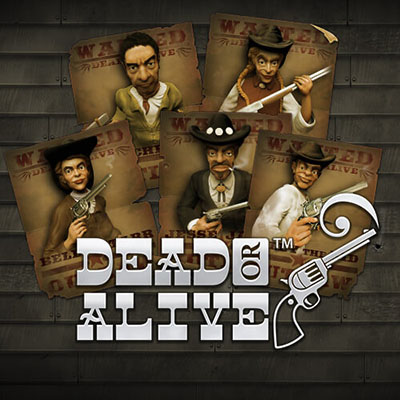 The wild wild West, known for its harsh conditions and ‘are you feeling lucky punk’ attitude that has kept it within the public eye even today. You’ve got your John Wayne’s your Clint Eastwood’s but did you ever stop to think that you might be involved in some way shape or form? Well now you can thanks to this NetEnt powered adventure out West titled: Dead or Alive.

Dead or Alive is a 5 reel by 3 row slot that has 9 betting lines coursing throughout the middle of it. Featuring a variety of different modes and features including: scatters, wilds and sticky wilds among others. This is your classic western shootout, with the winner walking away with the gold as well as their own life. Saddle up ladies and gentleman because this is a ride you won’t easily forget. Dead or Alive can be played across multiple desktop devices, including both Mac and Linux systems, so don’t worry you’ll still have a chance to play.

NetEnt (short for Net Entertainment) are known not only for their highly anticipated online slots and games, but also for their pioneering attitude towards the industry itself. You may know them from cutting edge titles such as Blood Suckers and Bob the Epic Viking Quest.

This is a very simple slot to grasp, in-fact if you have played any previous games in the NetEnt catalogue then you will feel right at home. The graphics and animations here do an excellent job in creating a sense of immersion, where every decision made by the player seems important and impactful. In the distance once can make-out a stormy sky over sand dunes and taverns. We mentioned that immersion was a big pull here, and this us just one example of how they pull this off.

The symbols themselves also play along with the theme that has been set out in-front of them. Each are drawn to precision and represent a different numerical based value depending on how many are included within the winning pay-line.The lowest paying icon happens to be the shot glasses, whereas the golden sheriffs badge will give you the highest potential pay-out. Try to strategise when it comes to the symbols you are attempting to match, as well as the order in which you do it. You might find that it’s best to wait for a potential match rather than jumping the gun. The wants poster symbol serves as this slots wild symbol, which will substitute the symbols on the board for scatter symbols that unlock the free games feature which can multiply scores even past their breaking point.

Dead or Alive perfectly captures the feeling of the plains of the West in ways you never knew existed. The immersive aspect of this slot is only heightened by the addicting gameplay that it has at the forefront of every spin you choose to play. NetEnt have done an amazing job (yet again) at constructing an idea and then delivering on the promise of making it worthy of your time. Play Dead or Alive today.