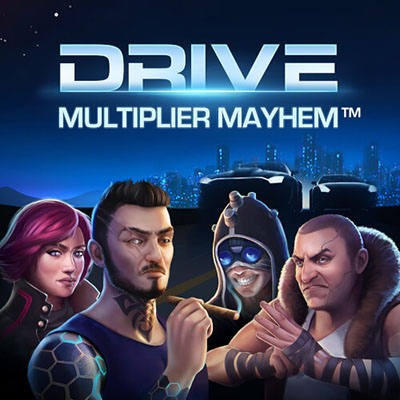 If you like your slots fast and furious, then you will definitely love all the action in Drive Multiplier Mayhem by NetEnt. Your role will be that of Jette, a sexy pink-haired driver who loves that ignition button as much as she loves pulling on her tight black and pink leathers. Jette is racing against her male counterparts Hamaki, Twitch and Bruiser.

The game has a kind of futuristic theme set against bright city lights withJetterevvingher engine as youspin the reels. Drive is a 5 reel and 15 winning line game where you stand to win awesome multiplier wilds, scatters and more.

NetEnt is the most well-known online video slot developer in the world. Despite humble beginnings, the company has managed to overtake gaming giants like Novomatic, IGT, Microgaming and more. NetEnt slots are especially huge in most of Europe, but they’re also expanding to markets like USA.

The company’s tactic is to avoid any legal issues as much as possible. They tend to avoid jurisdictions like Canada, France and most of the USA where online betting is either unregulated or prohibited.In 2016 the company expanded its reach from online to offline where it allocated physical shops in the UK, making it an essential component of fixed odds betting terminals.

The game has transparent, cool looking reels and impressive graphics.Coin values range from 0.02 to 0.5 with up to 10 betting levels.  The game starts off with exciting bonuses right in the base game.

Drive Multiplier Mayhem sound a bit complicated to grasp, but provides some good wins once you do. It is a medium to high volatility slot which can reward up to 1,200x your stake in the base game, but over 5,0000xyour stake in the free games.