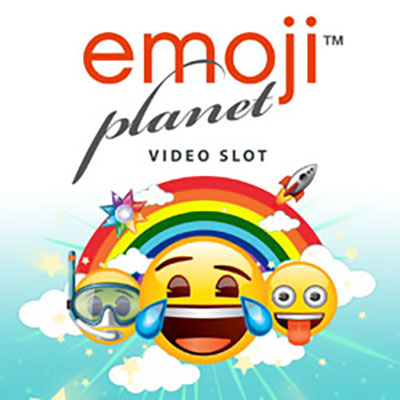 With the current number and different designs of emojis today, it would be impossible to imagine that one time there were under 80 emojis only. Today it’s become almost impossible to send a text/conversation flow without using an emoji.

Emoji Planet is a 5 reel, Clusters pays slot that celebrates the emoji culture. It is designed by NetEnt and is available to play across all mobile devices. Stakes start from 20p to £200 per turn. Interesting game features include Avalanches and more. A cluster pays slot means that the game doesn’t have any paylines or reels and wins can be formed anywhere over a 5x6 grid.

NetEnt is known for incorporating quality graphics and overall display in their slots. The company has over 100 online casino games in their name, including classics like Craps, Keno, Baccarat, Roulette, Blackjack, etc. Their live casino offerings and table games are popular, but it’s their slot machines that are the real favourite. They have quite a few huge branded titles like the "Netent rocks" series of slots that includes Motorhead, Guns n Roses and Jimi Hendrix.

Their blockbuster movie slots are also popular and they include big hits like Scarface, Magic Portals, Dead or Alive, etc.

The aim of the game is to form clusters of matching symbols. If you have 5 or more identical symbols, with each one bordering the other horizontally or vertically, then you’ll score a win. Bigger matching clusters pay higher payouts.

Here’s a look at the emoji meter bonuses that each of the fiveemojis has;

Bomb feature – 8 random emoji symbols will be destroyed and a cash prize between 5x to 100x your bet is rewarded at random for each of the symbols destroyed.

Pizza feature – a 3×3 overlay of a symbol chosen at random, except the scatter, appears on the reels randomly.

Kiss Mark feature – 3 sticky wilds are added to the reels at random. Each of the wild has 3 lives.When the wild forms part of a win, it loses 1 life which means there’s 3 potential wins for each sticky wild.

Rocket feature – a stack of 10 wilds will appear on and above areeland form a winning combination. When the new symbols drop in place, new wilds from the stack will keep landing on the reels until there are no more left.

Two Hearts feature – this is only activated when there’s no more winning combinations to form or if there are no other Emoji features that can betriggered. Your total win amount depends on how many times the meter fills up plus 1.

Emoji Planet is a fun and entertaining slot with lots of action. Wins can go up to 5,000x your stake with each Avalanche which means players will definitely get a return from this slot. It’s a medium variance slot with good wins in the main game, but even better wins in the bonus rounds.