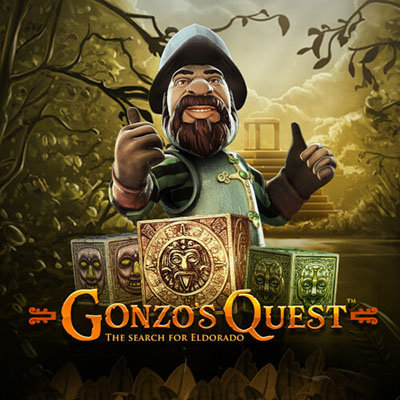 Any history aficionado will tell you that Gonzalo Pizzaro was instrumental in the stories of Eldorado: the city of gold. This Spanish conquistador is the main inspiration for Gonzo’s Quest: a 3D online thrill ride that is sure to get a rise from players that enjoy slots with a base theme that is ripped straight from the pages of old. Gonzo’s Quest can be best described with the word: immersive.

Since their inception NetEnt have produced over a hundred titles, each with their own significant themes and experiences. These guys are tried and tested and have even stood the test of time itself, over a decade of entertainment and we’re sure there will be decades more to come. NetEnt: the dynasty of the online gaming industry.

Gameplay features of this casino slot

Not many games have this amount of detail, this is most evident after the initial cutscene ends and the real game begins. We were personally left in awe when we first saw what kind of slot we were getting ourselves into, you will fall into your own imagination in the amount of possibilities you could see yourself in. Each symbol in Gonzo’s Quest also carries on this theme perfectly. Every symbol is as detailed as they are intriguing. Each symbol is represented by a different colour and shape, the brighter the colour the higher the scoring symbol, simple! It goes without saying but the gold symbol is the highest scoring symbol so be sure to prioritise that over any other symbol in order to win big! The wild symbol also happens to be a goldfish colour which is in the shape of a question mark making it clearly identifiable from other in-game symbols. Players should also look out for the gold medallion symbol as this is the free fall symbol.

Gonzo's Quest is rife for different numerical values depending on the different coins earned in- game. 1, 2, 5, 10, 20 and 50 will in turn represent bet levels of 20, 40, 60, 80 and 100. Players can spin from as little as 20p per spin with the maximum bet being around £50 making it perfect for multiple different play-styles and players themselves. There is lots and lots to see and do in Eldorado that you will no doubt want to make this your permanent state of residence. Gonzo has already said he’ll stay so why not buy an apartment together? It’s not like money is an issue now despite the ridiculous property value living in this city of gold.

Gonzo’s Quest is one of those online slots you can just sit and play for hours without even questioning what time it is. Gonzo is going to be a very rich man at the end of all this thanks to the work put in by you the player. There is always more ways to play with NetEnt games, what you see at face value is only just the beginning, exactly like Eldorado itself: there is always more that meets the eye. 9/10