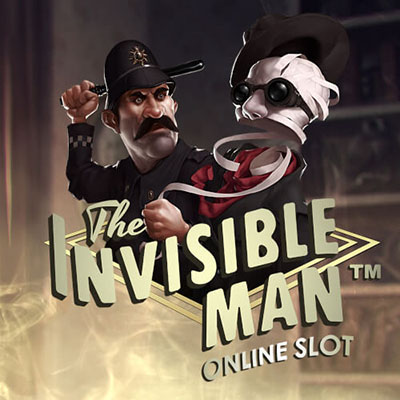 The Invisible Man from NetEnt is a stylish slot on the 1933 film version of H.G. Wells’s 1897 novel.  This five-reel, 20 pay-line online game might be based on an invisible man, but the number of features on offer is clear as day.  What’s more, features have been extremely well rendered, tying in nicely with the original story.  The Free Spins bonus is a triumph as it also gives players the opportunity to win another bonus game by filling either the Griffin’s Rage or Police Spins meter.

NetEnt have been a force to be reckoned with in the world of online gaming since they started out in 1996.  Since then, they have grown from a modest operation into a gaming behemoth that employs over 600 games and boasts a portfolio of more than 200 online slot games.  In 2017, NetEnt jackpots paid out more than 78 million euros.  With licensed like Scarface and Game of Thrones to original progressive slots such as Arabian Nights and Cosmic Fortune, NetEnt deliver something for everyone.

Basic symbols are 10, J, Q, K and A while the premium symbols are drawn from the characters in the original story:  Flora Cranley, Arthur Kemp, Dr Cranley and Mr Hall and Mrs Hall.

Spin a Policeman Wild symbol on reel one or an Invisible Man symbol on reel five and these symbols become Walking Wilds.  They shift across the screen until they disappear from the reels and award free respins along the way.

If a Policeman and Invisible Man symbol meet on the game-board then this triggers the Free Spins game.  You will be awarded ten free spin as well as another four should the Walking Wilds meet again - which is fairly likely as more wilds are added during Free Spins!

But that isn’t all… there are two meters above the reels.  Each time a relevant wild is pushed off the reels it will help fill one of the meters.  Fill up either meter during the Free Spins round to activate another bonus at the end as follows:

Police Spins -  you know you’re getting hotter with these three free spins, each with five added wilds

While even the film might be nearly 100 years old, NetEnt have used modern technology to optimise The Invisible Man for mobile as well as desktop devices.

The Invisible Man from NetEnt is a very stylish addition to the legacy of this great story.  The game-board has a vintage art deco feel, while the premium symbols are drawn with a deftness of touch that is rarely seen in online slots.  Thankfully, the feature-offering here is just as impressive as the aesthetics.  Griffin’s Rage is a particular highlight as the frustration of trying to find an invisible man is counteracted by the generous cash prizes with multipliers.