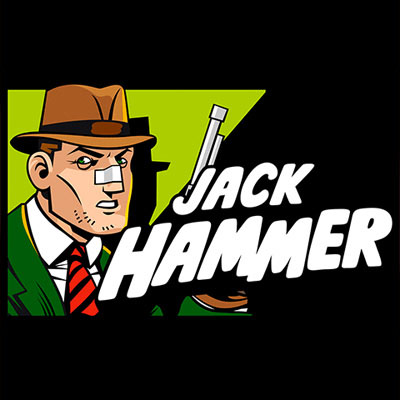 Marvel comic aficionados will already be familiar with Jack Hammer, the private investigator with a nose for sniffing out crime.  NetEnt have brought the eponymous hero’s noir universe to life with this comicstrip style five-reel, 25 pay-line slot.  The well-drawn symbols including Jack Hammer himself, the evil Dr Wuten and a damsel in distress, coupled with the looming city skyline create the perfect setting for some super-sleuthing.

You don’t have to be a detective to work out that one of the massive plusses of Jack Hammer is the Sticky Win feature which locks-in winning lines for free spins.  With a super-high RTP of 97% players are advised to get on the case.

Founded in 1996, NetEnt now have more than 600 employees and a portfolio of around 200 games played all over the world.  As the online gaming industry is constantly moving forward, NetEnt relies on its creative and technical talent to stay ahead of the competition, resulting in quality games like Finn and the Swirly Spin, Starburst, Scarface, and, most recently, Planet of the Apes.  In 2017 NetEnt jackpots paid out more than 78 million euros - so what are you waiting for?

Jack Hammer brings the noir comic book world to life in all its crime-ridden glory.  The designers have gone to town with the symbol design, opting to forgo traditional playing cards for symbols including a sinister orange beaker of poison, a ringing phone, a skull and crossbones blimp and a copy of the Daily Grand.  Premium symbols take the form of Jack Hammer holding a gun and evil Dr Wuten clasping his poison, amongst others.

The free spin symbol is a Ticking Bomb which can be locked into place like all other symbols with Sticky Wins (see below!).  Keep your nose to the ground for colourful explosion Wild symbols which substitute for everything except for Ticking Bombs.

The sticky win feature is a real draw of Jack Hammer.  When you spin the reels any winning line will remain locked-in for free respins.  This only ends when you don’t hit a winning line which gives you some real opportunities to win big across the board.

Win up to 30 free spins by spinning as many Ticking Bomb scatter symbols as possible.  As with regular symbols, Ticking Bombs are locked-in for free respins until their are no more winning lines.

Although those who remember the original comic strip will appreciate the attention to detail of Jack Hammer, the game is good enough to standalone.  The comic-strip animation is bright and crisply drawn, while the hot jazz and city buzz in the background compliments the action.  The two things that really make Jack Hammer one to look out for are the Sticky Wins coupled with unusually high RTP of 97%.  Crime might not pay, but busting criminals definitely does in this online caper.