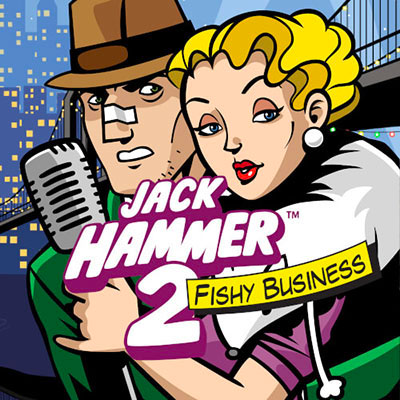 Building off the success of its predecessor, Jackhammer 2:  Fishy Business from NetEnt sees the noir PI getting back on the case with even bigger fish to fry.  Thankfully, this sequel adheres mostly to the ‘if it ain’t broke, don’t fix it’ philosophy, keeping for example the Sticky Wins mechanics that made the first game such a favourite with online gamers.

The comic book aesthetic, though updated, also remains; so what’s changed?  Well, there are now 99 win-lines across five reels and the volatility of the game has been decreased so that wins are generally smaller but far more frequent.

In 1996, NetEnt were a modest three-person game development studio with big ideas.  Now, thanks to some of the most creative and innovative thinking in the industry, NetEnt have exploded into a massive gaming industry player, with more than 600 staff and 200 games which paid out more than 78 million euros worth of jackpots in 2017 alone!  NetEnt have developed their own unique content and responded to cultural trends with hugely popular releases including Blood Suckers, Secrets of Atlantis and Planet of the Apes.

After saving Grand City in the first game, Jack Hammer is enjoying a mayoral gala in his honour… that is until a Don Crabby and his cronies gatecrash the party and snatch the beautiful singer, Pearl.  Basic symbols include a speedboat, a violin case and barrels of fish.  Premium symbols focus on characters like Don Crabby, Pearl and the eponymous Jack Hammer, all of which are well-rendered.

Wild symbols are shot through with bullets and substitute for all symbols except for electric eel freespins.

Sticky Wins were perhaps the best feature of the original Jackhammer game and we are pleased to see that NetEnt have decided to stick with them.

If you spin a winning combination then the win-line will lock in place for a free respin.  This repeats until you don’t spin a win.  It definitely ups the ante during both the base play and the free spins bonus.

The Jackhammer free spin bonus is also back, but this time you need to spin five or more electric eel symbols to zap the bonus into life.  When triggered, you will receive up to 20 free spins, each with a 2x multiplier.

Jackhammer 2:  Fishy Business is optimised for mobile as well as desktop devices so you can embark on this crazy caper wherever you are.

Jack Hammer vs Evil Dr Wuten was a massive hit for NetEnt.  The second incarnation of the comic book-themed slot takes that winning formula and tweaks it to create something equally as playable.  While the differences from the original - 99 win-lines, lower volatility and Fishy symbols - are immediately evident, the noir comicstrip graphics remain, as does the excellent Sticky Wins feature.  Whatever your caseload, Jackhammer 2:  Fishy Business should be on your to-do list.