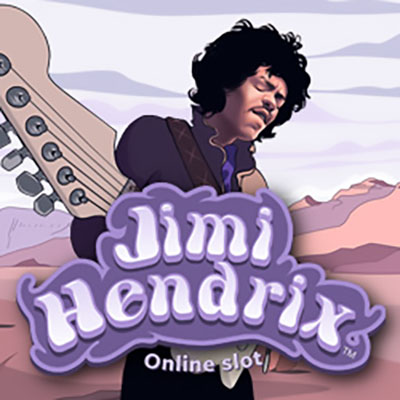 Join one of the greatest guitar heroes who ever lived on a groovy journey into the world of Jimi Hendrix, where awesome guitar solos and 60s flower power await.  Part of NetEnt’s trilogy of Rock-themed online slots, Jimi Hendrix Slot is a five-reel game that incorporates the fuzz-drenched music of the guitar wizard into its gameplay, as well as psychedelic touches like flowers springing out of winning combinations to make you feel as if you were back at Woodstock (even if you were never there in the first place).

NetEnt have liked to do things a little differently ever since they started out in the online gaming industry back in 1996.  There focus on creating innovate and creative titles has appealed to gamers across the world, as have their jackpots which paid out around 78 million euros in 2017 alone.  While players have enjoyed NetEnt titles like Starburst and Finn and the Swirly Spin for some time, their NetEnt Rocks trilogy of games is aimed at those who like to rock out while they are having a spin.

As part of the NetEnt Rocks trilogy of games, Jimi Hendrix Slot looks and sounds amazing with a soundtrack which will have you head-banging as you’re spinning.  The psychedelic visuals are heightened by the premium symbols which include an eye, a green flower, a vinyl disc, a heart and a peace sign.

The wild symbol is (no surprise here) a portrait of Jimi himself which substitutes for all symbols except the scatter symbols (Red Guitar, Purple Haze and White Guitar symbols).

Spin three Jimi Hendrix scatter symbols to unlock the Pick and Click feature.  Hendrix fans will recognise the snippet of the solo from ‘Little Wing’ as they are asked to select three speakers in the hopes of matching three high-value symbols.  Players can either scoop a coin win of up to 30x your stake, or one of three respin games inspired by the great man’s music  These are:

-  Little Wing freespins:  Between six to twelve freespins with up to five wilds added to the reels

Put together a solo of four or more Red Guitar symbols to trigger face-melting free respins until no more Red Guitars appear and the win is tallied up.

Watch out for the Purple Haze symbol on reel one to trigger this feature.  The icon itself will become wild, turning lower value symbols wild as well for some foxy wins.

The Verdict on Jimi Hendrix Slot

Jimi Hendrix slot is a fitting tribute to the guitar king from Slot Gods NetEnt.  Not only are the soundtrack and aesthetics rocking, but the features really suit the theme making this almost as enjoyable as listening to Axis:  Bold as Love.  With an RTP of 96.9%, players can also be assured a lot of action.  Fans of Jimi Hendrix slot might also like to check out Guns ’N’ Roses and Motorhead slot from the same shredding series.