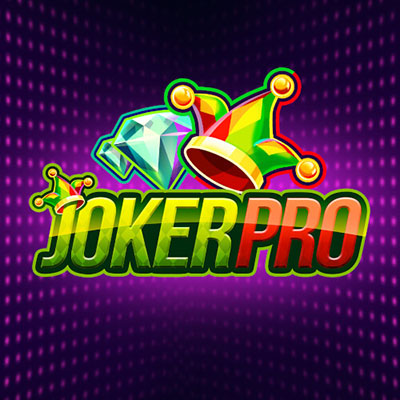 Joker Pro is a 5 reel by 10 pay-line video slot from Swedish juggernaut developers NetEnt. This is a classic online slot that works very well in homaging the classic casino style gameplay that vintage players will know and love. NetEnt’s portfolio of games builds by the second which is very good for players who enjoy become enthralled and immersed into these worlds that not only take you places imagination wise but also wealthy wise.

In 1996 Net Entertainment was formed in Sweden as an offline casino operator, today NetEnt is one of the leading names in online gaming that now stretches worldwide. The ever-growing list of games that NetEnt have created have, if anything, inspired many other games within the market, this is something that is completely unheard of in modern day gaming, where re-inventing the wheel can be difficult when there is already a set path of creating a successful slot.

This is a very smooth and fun slot to enjoy, every spin we played we felt like we had a different experience. NetEnt’s standard of gaming is continued here and will no doubt pass on to the next one while retaining its magic here in Joker Pro. There is of course an auto-play mode which allows players to set a specific amount of games they’d like the computer to play for them! Don’t think of this as being lazy, no this is just resting your hands and eyes for the next spin! Players will need to select a specific number of games they’d like to spin and the betting for these spins in advance, once that has been completed the player can then simply kick back and watch as the money begins to pour in.

Expect wilds and scatters to make an appearance here on top of regular symbols. Both of these symbols still serve the same function as regular wilds and scatters you might see in other online slots. There is also a joker re-spin symbol which will activate whenever one or more wild symbols appear on any of the reels. This icon is represented by a hat worn by the joker himself and will alter the game slightly by turning two of the reels into wild factories. Once you have activated this you will be hoping for more wilds to appear as if they appear on any of the other reels then players will bag themselves free spins as well as the ability to multiply their scores even higher due to the countless added features which are showcased here. Lots and lots to do and so little time here in Joker Pro, just remember that the joke isn’t on you.

The joke is most definitely not on the player in Joker Pro: the online slot from game developer juggernaut NetEnt. How many times can you say that you’ve managed to be taken on a journey full of wealthy proportions. There’s so many things we could say about Joker Pro but we’d only be repeating ourselves from the text you see above. To give a quick summary of this title we would say that Joker Pro is the perfect synergy between fast acting gameplay and beautiful graphics that both work in perfect harmony to create an experience that stays with you for a long long time. 8/10