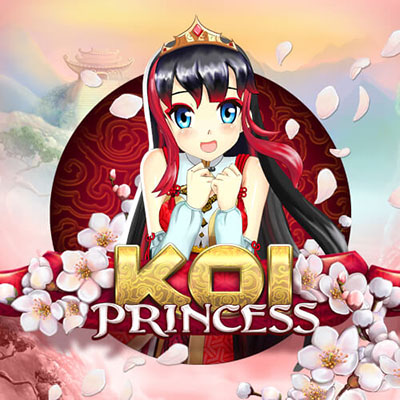 Manga and anime are hugely popular forms of media adored across the generations; the playful nature of the animations, alongside the magical stories told by them, create a world separate from our own. We delight in such escapism, as Koi Princess demonstrates so brilliantly. This 5 reels and 20 paylines slot machine is an oriental themed paradise, filled with all sorts of special features.

As you can see from the aesthetics used, the nature of oriental slots has changed rapidly over recent years, with the more conventional imagery falling away. There’s still elements of it to be seen, but generally the graphics are more contemporary, more in touch with younger generations of gamblers.

Believe it or not, this is an NetEnt game, which goes to show how changeable the products they create actually are. Sometimes with online developers, it can be hard to separate one title from another, but that isn’t the case here, a factor which we can’t praise enough. Their ability to adapt to different forms of entertainment is mostly down to the number of years they’ve spent in the business.

Back in 1996, NetEnt was nothing more than a company of humble beginnings, with nobody knowing if they’d survive or thrive; fortunately, the latter was what happened. Thanks to their determination, not forgetting the partnerships this company has formed, has left us with a games catalog various walks of customers can engage with.

As much as we’d love to talk about the many strokes of the stunning aesthetics on display, as well as how cute and big eyed our princess is, there’s far too many features to discuss instead. So as not to bombard you, we’ve attempted to reduce down all the jargon to give you overviews that inform rather than overwhelm you.

Our review has been quite thorough, and yet we’ve not even scratched the surface of how in-depth Koi Princess is. Should you be one for games that deliver variance as high as its returns, this is going to be a video slot that’s tough to beat. What is more, it looks as beautiful as the gameplay it offers, thus making it a holy grail of iGaming entertainment.