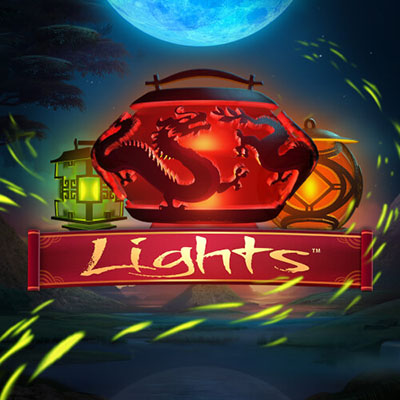 There’s simple beauty in everyday experiences, with a fine example being of the ambient lighting from fairy lights and lanterns. To capture that most basic of magic, the one which we always have access to without giving it much notice, we can play Lights. Created by NetEnt, it has all the characteristics of their contemporary approach, chiefly demonstrated by the 3D graphics.

Despite what the title of this game suggests, Lights isn’t a bog standard title, but is actually an oriental themed video slot. The details of the theme are subtle, but they help to create this tranquil picture of serenity. If you’re one of those people looking to become more zen, this could be an avenue to explore… plus, it can win you money!

Seen as the home of ‘better gaming’, NetEnt has a reputation for being a favorite among online casino players. It could be said that a lot of brands make such claims, but we find that NetEnt are one of the few that are able to prove their level of status, with their age being part of the proof.

This label was founded in 1996, and has since released 200 titles, with this large catalog having reached hundreds of thousands of people. We know this due to the massive number of online casinos NetEnt work with; in total, there’s over 170 of them available to date, with that number set to grow.

As appealing as the twinkling lights are, it’s the mountainous landscape that’s almost the star of this show; the gentle rolling of the countryside, the calmness of the water beneath the grid, it all comes together to form an oasis.

Even though there’s no more than 9 winlines, the experiences we can gain from making that first wager are worthwhile, particularly that of the wild symbol. In a surprise turn of events, we feel that the wild actually surpasses the free spins, due to the uniqueness of its appearance.

In our opinion, Lights is a pretty video slot, designed to be compact in its features but nonetheless attractive in what it offers. This isn’t a big money earner, that much is true, but that doesn’t take away from the opportunities that the paytable give to paying customers. No matter if you find the free spins better or the wild icon, the end result will be one of happiness as you reach enlightenment.