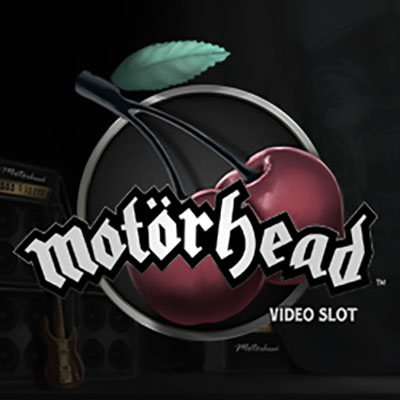 Following in the footstep of music greats like Guns and Roses and Jimi Hendrix, its Motorhead’s turn to rock your reels, so we suggest you get ready for the greatest show of all time! In fact, you may want to turn up the volume for this one, featuring some of the bands greatest hits including Iron Fist, Ace of Spades, Overkill and Killed by Death, they’ll be plenty of head-banging as you play. This game isn’t only reserved for fans of the band – its high-energy features have managed to grab the attention of gamers all over the world.
The slot really sets the scene with its fantastic introduction video. The footage shows the group playing one of their biggest hits, The Ace of Spades, giving players an insight into what they should expect from the game. Tying in with the theme, all the symbols are references to the band, while there’s also a beautiful tribute to the legendary lead singer Ian Fraser Kilmister, or as most will know him Lemmy. The game is appropriately decorated and has been made to look like a stage set-up filled with rock-inspired equipment from a guitar to an overload of amps.

With fantastic graphics combined with some of the most original themes, it’s easy to understand why NetEnt games are so popular. They don’t just focus on one thing either – known for their variance they have created everything from table games, pokies, video slots and so much more. Not to mention, their casinos are considered some of the best in the world.

Its reels may not be the most colourful, but it doesn’t matter when you have 76 pay lines to play with. The layout is fairly standard with its 5 reels and 3 to 5 rows. As previously mentioned, the game’s symbols are all references to the band from a horseshoe to a four leaf clover and Lemmy himself. The Ace of Spades logo acts as the game’s WILD, while the SCATTER is represented by the Motohead logo.
One feature that stands out in the game is the Mystery Reel. Active on every spin in both the main game and during the Free Spins feature, if you see any Mystery symbols when the reels come to a stop, these can turn into any other regular symbol. This could increase your chances of winning if you score a winning combination. Meanwhile, don’t be alarmed if you see bombs explode, this isn’t a bad thing! Like the Mystery Reel, this will create more mystery symbols, ultimately leading to a greater total. Players can also land Free Spins when 3 or more SCATTERS land anywhere on reels 3, 4 and 5.

We get it, not everyone’s going to love a slot game dedicated to the band Motorhead, but with fantastic features and impressive graphics throughout, you don’t have to be a fan to enjoy it. If a RTP of 96.98% doesn’t keep you interested, the game’s famous soundtrack certainly will.