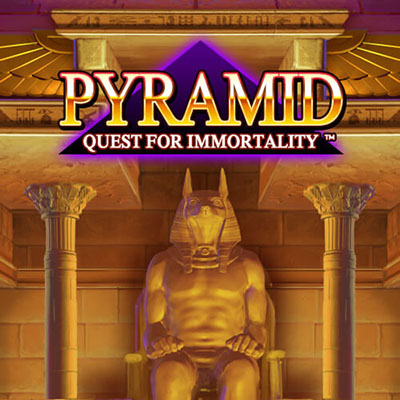 Win your share of Ancient Egyptian treasure in NetEnt’s Pyramid: Quest for Immortality. A new favourite from leading video slot developers, this 5-reel game has 720 ways to win as you journey to an archaic time where golden statues of ancient deities stand guard over the Pharaoh’s tomb.

Pyramid uses the Avalanche feature to replace traditional spinning reels, making this game comparable to another of NetEnt’s well-loved slots, Gonzo’s Quest. As you land one winning combination, the symbols disappear to allow more to take their place, giving you greater opportunities to take the Pharaoh’s riches for yourself. The more winning combinations you land in succession, the more chances you have to win big and benefit from prize multipliers of up to x10. With bonus features including WILD substitutions and WILD generations, you may just find valuable riches of multipliers and cash rewards.

NetEnt are a leading developer of video slots, having created over 200 games and won several awards for their consistently great work. Recognised as a pioneer in the industry, NetEnt are amongst the most well-recognised casino game developers, their games powered by their own cutting-edge platform. Players enjoy NetEnt games for the unique themes and stories, detailed graphics and innovative features that make them so fun to engage with. Having been producing slot games for over two decades, their global team only continues to grow and bring out even better entertainment for consumers.

Pyramid has a 1-3-5-5-5 row formation and is playable with stakes from 10p to £200. With a large selection of levels and coin-values to choose from, players have the freedom to choose the ideal stake value for them and can easily change it up as they spin.

As you explore the ancient tomb and its many treasures you’ll appreciate stunning visual details that include hieroglyphics and the foreboding statues of Gods Horus and Anubis. Symbols take the form of recognisable Ancient Egyptian icons including scarab beetles, eagles, snakes and the Pharaoh’s mistresses, who would have been buried alongside him. Keen explorers will be impressed by the game’s bonus features as they aid players on their quest to win the great Pharaoh’s bounty.

WILDS – The WILD symbol in this game is the golden Ankh against a purple background. This symbol substitutes for all others.

WILD GENERATION – If you land a winning combination that includes a symbol on top of reels 2, 3 or 4, these symbols will transform into a WILD for the next Avalanche, boosting your winnings.

Pyramid: Quest for Immortality is an entertaining, one-of-a-kind slot game with some great features to get excited about. The colourful visuals and soundtrack really make the player feel as though they have been transported into Ancient Egypt and the Avalanche style of gameplay offers something fresh for slot enthusiasts looking to try something a bit different.