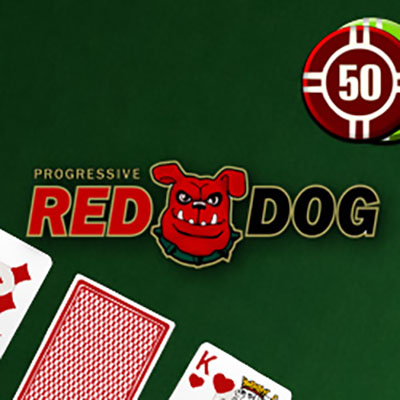 A simple variation on poker, Red Dog Progressive instructs players to place their bets in a pot with two cards being dealt to the first player. The player then has the option to wager any amount they choose up to the maximum amount in the pot. A third card is then drawn, with the aim to be of a numerical value in-between their first two cards, thus winning the bet. If a third card is drawn that is outside the two cards or the same value, then the bet is lost along with the player’s wager.

In a home game, Aces are low or high, therefore with two Aces a 12-card spread is used. When played in a casino, the higher the spread, the lower the payoff, and Aces will always be high.

NetEnt has developer more than 100 online casino games. Some of their other greatest hits include Dead or Alive, Steam Tower and Starburst. If an old school poker game from the Old West isn’t your style, then you’ll be hard pressed not to find another favourite among NetEnt’s impressive portfolio.

An interesting game with roots to the Old West; Red Dog is unlike any other form of poker with only three cards dealt with player on the betting spread. It wasn’t very popular back in the 1800s due to the fact that the fairly relaxed rules made it east for cheating to occur. It was later re-introduced in 1931 with new rules and the new name of Red Dog Poker.

In Red Dog, cards are ranked the same as in poker, with the Ace being the highest value card. A bet must be placed before any cards can be dealt. Two cards will then be dealt facing up by the dealer. If it’s a match in this instance, the dealer will then draw a third card. If this matches the player will be paid 11:1. Any other card will result in a push.

Another possible outcome is when the cards are not consecutive or matching, the dealer must then call the spread, and the player has the option to either match the ante with a further bet. Check out the different spread possibilities below:

A simple but rewarding games that is accessible to the majority of players, regardless of skill level, with a simple betting strategy. For those looking for something more technologically advanced or with bonus features and replayability should consult NetEnt’s extensive portfolio of online slots.