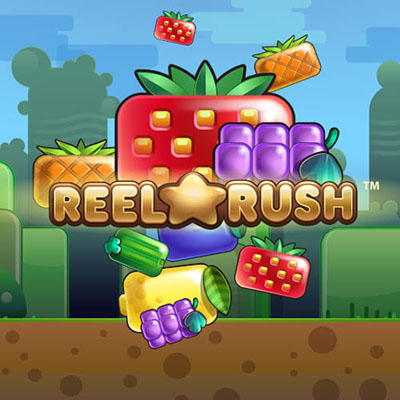 Those players with a sweet tooth will love this 5-reel, 5-row video slot by Net Entertainment (NetEnt). Reel Rush presents a unique build of reels and row configurations that provides up to 3,125 ways to win in addition to Wild symbols, Free Spins, and more.

Reel Rush’s presentation has to be one of the most colourful we have seen at Fortuna Gaming with almost every colour under the rainbow represented with crystal clear, eye-popping graphics.

NetEnt has developer more than 100 online casino games. Some of their other greatest hits include Dead or Alive, Steam Tower and Starburst. If spinning multi coloured candy and fruit symbols isn’t your thing, then you’ll be hard pressed not to find another favourite among NetEnt’s impressive portfolio.

Gameplay on this UK Slot

NetEnt veterans will feel right at home with this slot as it features a similar controls and features to other titles in their portfolio. Autoplay can be activated to make gameplay seamless and players can also control sound and view the rules of the game using the wrench icon at the bottom of the screen.

The Wild symbol in Reel Rush appears on reels 2,3,4 and 5 both during the main game and the Free Spin mode. It can take the place of all other symbols to allow for more combinations. After the 5th respin activates, the player is awarded with eight free spins. In Free Spins mode, the player has 3,125 ways to win with a jackpot worth 480,000 coins.

One aspect that differs from traditional video slots is the reel format. The Reel Rush game screen opens with a geometrical reel set up with 1 symbol on the first reel, 3 on the second, 5 on the third reel, 3 on the fourth reel and 1 on the fifth reel. This means that there are 45 potential win line combinations. Therefore Re-spins and Free Spins open up more symbol places and increase this number even further.

Our Verdict of Reel Rush Online

From its shiny presentation to intuitive and unique reel format, Reel Rush does not present a conventional approach to online slot play. Some players will be open to this unorthodox approach while others may not want to put in the time to master the game and reap the delicious rewards contained within. NetEnt took a gamble and in this case, it paid off. Will online slot machines all follow this example in the future? Only time will tell. In the meantime there is much to celebrate for NetEnt fans to newcomers.