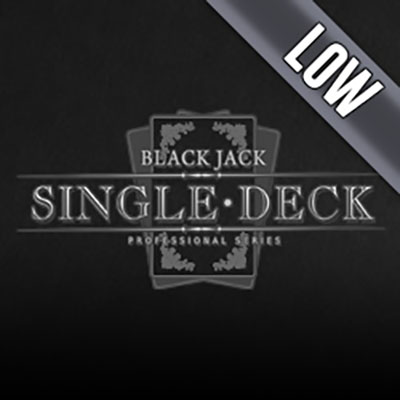 Blackjack’s variants are plentiful. It is such a timeless game with a simple premise, making it ideal for software designers to think up of newer and improved versions.
Single Blackjack Low is one of the many versions that are out there. There are 2 main things you need to know about the game: first is the ‘Single’ aspect, and second the ‘low’ aspect.
This variation of the game uses a single-deck (52 cards) rather than multiple-decks. What this does is, it decreases the house-edge which means potentially bigger wins for players.
The second aspect is that this variation has a lower betting range. Beginning from 10p, it is ideal for beginners or gamers who’d like to minimize their losses.

There are 2 things you need to first know about Single Blackjack Low.
1) Single Blackjack means it simply uses 1 deck of 52 cards – not including the Jokers. Most other Blackjack variations use multi-decks this can be 2 decks, 4 decks, 6 decks, and sometimes even more.
Although single deck Blackjack used to be the norm, it no longer is. This was done mostly to make it difficult for players to count cards – a strategy that took the casino world by storm! Also playing with a single-deck decreases the house edge by a little which means bigger wins for you!
2) Here we address, the ‘Low’ portion of the game. The developers have realized that everyone has a different comfort and skill level when it comes to placing bets. This version of the game is for players who would like to maximize their fun and minimize their risk! The bets can start as low as £0.10.
Aside from those 2 pointers, the rest of the game remains the same. From the objective, which is to reach a sum total of 21 without exceeding it to the general rules and strategies that have been outlined below.
GUIDELINES
- The values for the cards are as indicated: 2 to 10 are worth their face values, and cards with faces (Jack, Queen and King) are worth 10. Players can decide on how they would like to use Ace, as either a 1 or an 11.
- To land a Blackjack means to get 2 cards that add to a total of 21. These 2 cards have to be an Ace a Picture card, specifically. This pair of cards beats any other combination instantly!
LINGO
- Busting/Breaking: The total of your cards have gone over the 21
- Hit: This is to ask for another card
- Stand: When you are happy with your current collection of cards and would not like further cards
- Face Cards/Pictures: Jack, Queen, King are also called Face Cards or Pictures
STRATEGY
- Split: Upon receiving cards of the same value in the first hand that you’ve been dealt, you can choose to separate them. This will thus allow you to play them as separate hands. This means you will be playing with 2 different sets of cards instead of 1.
- Double: If you are feeling very confident about the first hand dealt to you, you can choose to double the bet you placed. The risk is, you are only allowed 1 additional card to the 2 that you already have to make up the final total.
- Insurance: If the dealers’ exposed card is an Ace, you can choose to take insurance. Taking insurance is a side bet which can be won if the dealer hits Blackjack. If they do, you will win twice the amount of your original bet.

Single Blackjack Low decreases the house-edge and reduces monetary risks! It is a perfect variation for players who’d like to tune off and play a little Blackjack just for the fun of it. It is also a great game to start with for beginners.