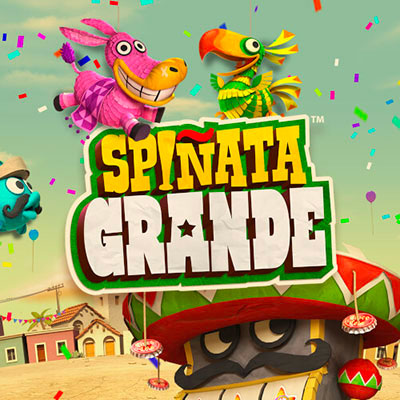 Anyone who has ever tried to smash a piñata with a stick while blindfolded and dizzy will recognise the fun in store with Spinata Grande - although I would advise against hitting the screen with a stick.  The format of the game-board is somewhat unusual, with five reels, four rows and a total of 40 pay-lines for plenty of chances to beat some big cash prizes out of the spinata.  This Grande game-board also hosts Colossal Symbols which cover reel sections of two by two or three by three blocks, helping the player towards bigger wins.

NetEnt were founded back in 1996 by just three people with big ideas and the creativity to stand out from the crowd.  That ethos has led to NetEnt transforming into a major player in the industry with a portfolio of more than 200 games.  Their 600 staff handle some 100 million transactions a day which gives you some idea of how popular their games have become.  Most recently, NetEnt have been making waves in the world of VR technology by incorporating 3D sound tech into games such as Jack’s 3D World.   Check out some of these branded and original titles from NetEnt:  Judge Dredd, Wonder Hounds, Scarface and Jack Hammer 2.

Spinata Grande is an authentic, rustic looking Mexican-themed slot with painted slatted reels in front of a colourful party scene complete with bunting.  The symbol line-up is a colourful collection of animal spinatas including a blue fish with a moustache, green and yellow striped toucan, a grinning pink donkey and a ferocious looking red bull.

A mini-slot game appears on the reels during the base game awarding bronze, silver and gold coins, as well as free spin symbols and extra spin symbols.  During the free spins round it only contains extra spins and bronze coins.

Colossal symbols can coversections of two by two or three by three positions of the game-board.  During the base game all symbols can appear as Colossal Symbols.

The Colossal wild symbol covers a three by three section of the game-board and only appears during the Free Spins round.

Spin three Free Spin symbols within the mini-slot machine in the base game to trigger the Free Spins round.

You will be the life and soul of the party with a minimum of three free spins, plus you can pick up more spins by landing ‘Extra Spin’ stars within the mini-game.

During the Free Spins round Colossal Symbols are limited to the Colossal Bonus, the Colossal Wild and all of the animal Spinatas.

Spinata Grande is a fun Mexican-themed game from NetEnt, a company who knows how to balance entertainment with massive cash prizes.  The large game-board and Colossal Symbols add to the raucous carnival atmosphere with plenty of line-wins, while the authentic aesthetics and often hilarious sound effects are the perfect accompaniment to hitting it big.