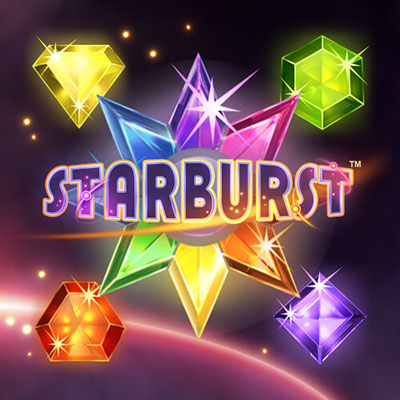 In the galaxy of online slot games, few titles shine as brightly as Starburst, a five-reel, 10 pay-line classic from veteran developers NetEnt. Despite Starburst’s spectacular visuals, this is a game that doesn’t rely on fancy video features but instead keeps players coming back with pure gameplay. A 243 ways-to-win format and deliberately few symbols means that players will often spin winning combo, which explode onto the screen. Add in expanding wilds with wild respins, a very generous RTP of 96.1% and a stellar jackpot of 50,000 coins and it’s easy to see why Starburst is a firm favourite with gamers.
Quick Links: Online Casino | Casino Games | Gonzos Quest | Immortal Romance | Reel Rush | Twin Spin | Blood Suckers

When you look at NetEnt’s portfolio of more than 200 online games - including slots and classic table games - it’s easy to see why this Australian games developer is at the forefront of industry innovation. NetEnt now have more than 600 staff across bases in Alerney, Gibraltar and Malta who make the 100 million or so transactions a day that the company handles run smoothly. Many companies talk about melding creativity and technical expertise, but NetEnt walks the talk with original content and branded games including: Scarface, Southpark and Planet of the Apes. They also keep players coming back with monster jackpots which totalled 78 million euros in 2017 alone.

Gameplay features of this online slot

The brilliance of Starburst not only lies in its cash prize-winning gems, but also in the elegance of its simplicity. As mentioned, the frequent combos are complimented by incandescent visuals that make this slot shine brighter than the competition. Basic symbols take the form of gleaming purple, royal blue and orange gems, while the line-up of higher value symbols includes an emerald, sapphire, red seven and a lucrative golden bar. The multi-coloured Starburst star is wild and substitutes for all other symbols.
Expanding Starburst Wilds
When the wild Starburst symbol lands on reels two, three or four, it expands into a stacked wild to cover the entire reel. The wild symbol will also remain in place for up to three free respins, making it a feature that can result in out of this world wins.
Starburst has been optimised for mobile and tablet devices.

Starburst from NetEnt is a true classic in the world of online slots that should teach fledgling developers that simple is often best. One of the main reasons for Starburst’s enduring success is its 243 ways-to-win format which means that exploding combos can occur all over the game-board rather than having to start on reel one and work across. Some players will miss the lack of a bonus feature round, but I think this is more than made up for with the Expanding Starburst Wilds that also offer up to three respins. The high RTP of 96.1% - typical of NetEnt - also helps this game to run inter-planetary rings around lesser slots.