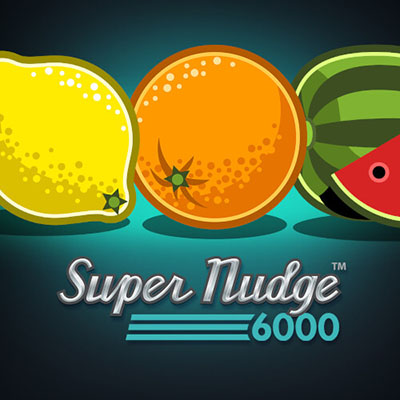 Supernudge 6000 sounds like a state-of-the-art robot from the 80s, and that’s kind of what it looks like as well with retro stylings and a three by three game-board.  The classic theme shows a zoomed out view of the chrome fascia of our three by three reel slot machine which sits in the middle of a nostalgic American diner.  While the aesthetics and sound effects are intentionally old school, the RTP of 97.2% wipes the floor with a lot of fancier modern offerings and the 6,000 coin jackpot is not to be sniffed at either.

Few online gaming companies have developed the reputation enjoyed by NetEnt, the Swedish company with a global reach.  NetEnt were established more than twenty years ago by a trio of creative and technical brains who dreamt of changing the gaming industry.  That dream has become a reality as NetEnt now boasts a stable of more than 200 games across multiple languages.  The fire in NetEnt’s belly is still roaring however as the company has now set its sights on bringing VR technology into their online offering.  For players who somehow missed the memo on NetEnt’s impressive portfolio, here’s a few titles to try out:  Jack Hammer 2, Judge Dredd, Motorhead slot, Scarface and Wonder Hounds.

Supernudge 6000 uses a classic reel-set with symbols that have now acquired a kind of gaming nostalgia and include oranges lemons, grapes, watermelons, bells and the jackpot symbol, dollar signs in the base game.  If you choose to transfer your winnings to the Super Meter then the symbol line-up changes to:  pears, cherries, grapes, watermelons, blue sevens and crowns.  Crowns are a special symbol in that landing a winning combination will award a mystery prize of between 300 and 6000 coins - fingers crossed.

Wins in the base game can be transferred to the upper three by three reel-board of Supenudge 6000.  This bonus segment of the game includes an automated nudge feature and a mystery prize symbol that could win you the jackpot.

Spin a winning combination of three crowns in Super Meter mode to ring up a mystery prize of between 300 coins to the jackpot of 6000 coins.

While gamers who get their kicks from graphically advanced video bonuses might feel short-changed, old school players with a penchant for retro style will appreciate the gameplay of Supernudge 6000.  The format, aesthetics and sound are all secondary to the massive RTP of 97.2% and tasty 6,000 coin jackpot.  With its whirring and clanking and chrome finish, Supernudge 6000 is like an old American muscle car:  It might not have power steering, but you know you’re in for a hell of a drive when you step behind the wheel.  Give it a whirl.