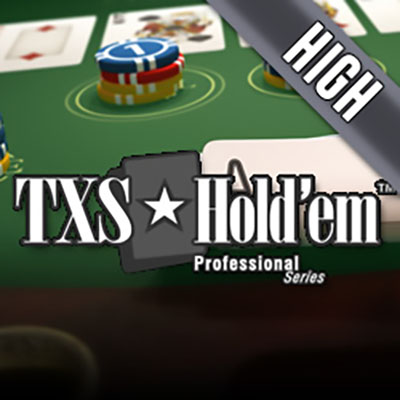 Texas Hold’em High Limit from NetEnt is a high stakes version of their hugely popular table game for those who know their Cowboys from their Pocket Canons.  Unlike their highly creative and sometimes off-the-wall video slots, NetEnt keep their table games deliberately subdued and classy to allow players to consider their next move carefully.  This game is no exception, with crisp graphics and the kind of relaxing soundtrack that you might hear in a grand lobby.  Although this ‘heads-up’ game doesn’t involve looking for ticks in other players, high rollers will still need to know how to play the odds to get an edge over the house while staking between £25 - £500 a bet.

NetEnt have been up and running for more than 20 years during which time they have grown from a small operation in Stockholm to an internationally recognised online gaming giant.  NetEnt’s cutting-edge platform handles more than 100 million transactions a day, while their games have been translated into more than 25 different languages to sate the international demand for their games.  Although perhaps best known for video slots, NetEnt also offer table games such as black jack and baccarat, VR-enhanced games and live dealer experiences for beginners and ballers alike.

Texas Hold’em High Limit is the highest stake version of NetEnt’s popular series of table poker games.  Meant for players who are already au fait with the maths and strategies involved, gamers must hold their nerve to beat the house with stakes of between £25 and £500.

Decide on your Ante bet before the deal as this will determine the limit of your future bets.  You will then receive your hand before the first three community cards are dealt.  Although this is a high stakes game, remember that you can fold at this point if you don’t think it’s worth playing on.  However, if you’re holding pocket aces then it’s probably worth upping your bet by as much as the Ante before the turn.

On seeing the turn card, decide whether to bet again or check to see whether you’ve out-foxed NetEnt.  Although this heads-up game means that you don’t have to be an expert in reading micro-expressions, any miscalculation will be punished in the long-run by the house - good luck!

This High Limit iteration of Texas Hold ‘Em from NetEnt gives high-rollers the chance to hit it big in a straight up game against the house with single bets of up to £500.  The layout of the game is clear and easy to follow, while the background music is unobtrusive and adds to the gameplay.  If the high stakes action starts getting a little heavy remember that NetEnt have also released Low Limit and Medium Limit versions of this famous table game to cater for all bankrolls.