The Legend of Shangri-La 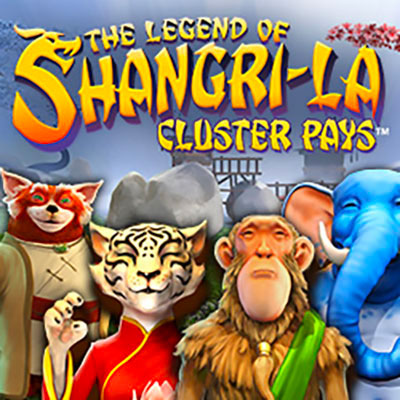 The Legend of Shangri La is as well known as it is illusive. Net Entertainment (NetEnt) have helped bring the 1933 legend to life with their take on the concept with their slot: The Legend of Shangri-La: Cluster Pays. Paylines are a thing of the past in this slots’ gameplay, which instead tasks players with making clusters of symbols, grouping icons together to unlock prizes.

This slot pulls off an incredibly well designed theme, which also looks; calm and simple at the same time evoking the quiet majesty of the legend itself. Trees, ancient temples and gorgeous waterfalls are all represented lovingly here in line with the Asian theme. The sound design is similarly unobtrusive and laid back with an animated red panda giving even more emphasis to the tranquility of the presentation.

NetEnt has developed more than 100 online casino games. Some of their other greatest hits include Dead or Alive, Steam Tower and Starburst. If taking back proof of another an ancient legend isn’t your thing, you’ll be hard pressed not to find another favourite among NetEnt’s impressive portfolio.

Players have 10 different betting levels to choose from which allows for casual players and more knowledgeable players to enjoy the game customised to their own comfort. Similarly there is a free version of the slot to try out before the player needs to put down their hard earned cash.

The absence of strict paylines results in the gameplay occurring within a 5x6 grid. Exact patting matches or matches occurring strictly from left to right should not be a concern of players for this slot. In this game, the player should focus on having as many of the same icons adjacent to one another as possible, either vertically or horizontally. To score big, players must find clusters of at least 9 icons together: the larger the group, the larger the payout.

If the player comes across groups of thematic icons like fish, dragonflies, butterflies or flower petals they can still net a smaller win. Those in search of the bigger payouts will need to find three praying animals – monkey, elephant, and a cat. Payouts increase with every additional icon the player adds to the group, up to a maximum of 10,000 credits for covering all 30 spots.

If that wasn’t unique enough, there is also a range of special bonus features. There are no traditional ‘wilds’ to be found but the player can uncover substitutions. When these appear as question marks, they will turn into any symbol that will give the biggest win for a particular spin. This means while valuable, these symbols can only be used once.

Unlock the sticky re-spins feature by finishing a spin with two clusters of the same icon. The player will receive a free re-spin, with those clusters now locked into place. If one more identical icon appears, another re-spin will be awarded, and will keep occurring until a spin is completed without other additions.

No slot however idyllic would be complete without a free spins feature, which is activated when the player hits 3 or more ‘free spins’ symbols anywhere on the reels.

The traditional slots gameplay is rather unconventional and this may put off more traditional players, however they will be walking away from a hidden wealth of bonus gameplay opportunities in addition to a 10,000 credit pay out should they win big! As is often the case with NetEnt – this is a slot you don’t want to miss.