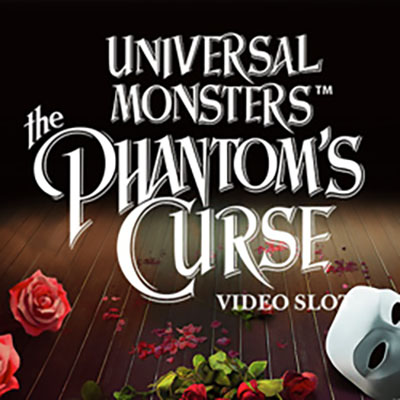 Just like the Phantom fell in love with Christine, you are bound to fall in love with this slot game based on the well-loved musical. It’s a much-anticipated game that’s due to be released at the end of this month – so say goodbye to those January blues!

Universal Monsters are horrors that were created by Universal Studios from 1920-1950 – the classic horror movies like Dracula, The Bride of Frankenstein, and The Wolf Man. This slot game enters into that world, bringing players into the dramatic world of the Opera?

NetEnt have been around for over 20 years, and are the self-proclaimed pioneers of online gaming. With incredible illustrations and animations and innovative ideas, they’ve produced some of the most entertaining games in the casino world. They’ve designed The Phantom’s Curse to add to their Universal Monsters collection: they’ve already created games based on The Invisible Man, Dracula and The Creature of the Black Lagoon.

This is a five-reel slot game with up to 40 paylines, set on a theatre backdrop, and filled with theme-appropriate symbols like daggers, hand mirrors, sapphire rings, yellow roses, the Phantom himself, and Christine. You’ve also got the lower value symbols of card suits – diamonds, spades and clubs. The highest-value symbol is of course, the Phantom, who will award you with 36x your stake if you match 5 of him in one spin.

The wild symbol – the Phantom is the wild, and can be substituted for any other symbol on the reels, except the scatter.

Scatter symbol – the scatter is the chandelier and only appears on reels 1, 3 and 5. Matching three of these will trigger the free spins bonus, which is the highest paying of the bonus rounds.

Free spins – triggered by the scatters landing on reels 1, 3 and 5, it will open a new screen, where the chandelier will be at the top of the screen. The free spins will keep on going until the Phantom appears and cuts down all five ropes attached to the chandelier. You can get wilds and stacked wilds in this round.

Masked Phantom respin – if the stacked mask and the stacked Phantom land on reels 1 and 5, each stacked symbol will turn into a sticky wild, offering a respin.

Pick and click – this bonus round will be triggered if both the stacked Christine and the stacked Phantom appear on reel 1 in one spin. First you’ll have the pick of 8 roses, which will each award a different cash prize. Then you get to pick one of three mirrors, which will award you a multiplier for what you won in the first part of the round.

This game is beautifully designed, and is set to be just as popular as the other Universal Monster’s games that NetEnt have produced. There’s some great bonus rounds in here, and the free spins round can be very lucrative. An entertaining twist on a traditional slot game.