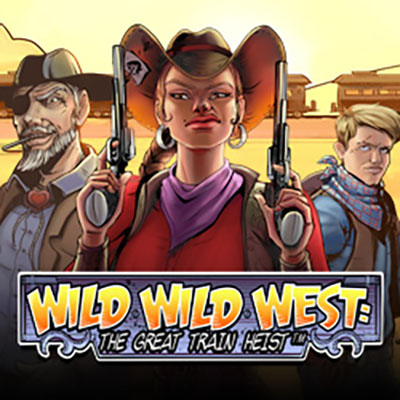 In the wee small hours of 8thAugust, 1963, Bruce Reynolds and his gang of robbers carried out a heist that would go down in history.  They stole over £2 million from a Royal Mail train travelling from Glasgow to London, in a carefully-planned operation that would come to be known as The Great Train Robbery.  In NetEnt’s The Grain Train Heist online slot game, you’re bound to come by any riches perfectly legally, and still revel the thrilling atmosphere of a daring heist!

Since 1996, NetEnt have risen to become one of the most popular and highly-regarded online slots developers in Europe and the Nordics.  Their library of slots games is enormous, and their games stand out in particular because of their cinematic quality.  Their games not only deliver solid slots play mechanisms, but also beautifully integrated and creative bonus features and artwork that tells a story and immerses the player in the theme.  Some other NetEnt titles include:

The game opens to the strains of an atmospheric Country and Western soundtrack, with a short animated introduction describing the main bonus features, which immerses you immediately in the theme.  We then see the 5 reels, set against a stylised desert background, featuring sand, scrub, cacti and, in the distance, a train that rolls by regularly, billowing steam as it streaks across the screen.

In an inventive detail, you spin the reels by clicking a gun barrel, and then see a variety of HD symbols roll by, including intricately illustrated card suit symbols, and a variety of unique characters involved in the heist.  There’s a young blonde bandit with a scar across his eye, an older, grizzled chap with an eyepatch and a cigarillo, a bruiser with a knife, and a young woman wielding a pistol.  The high quality artwork tells a story, and does a great job of drawing you into the world of the game.

The bonus features chime perfectly with the game’s theme, and include:

The soundtrack is layered and stirring, and sounds straight out of a film such as ‘The Magnificent Seven’.

This game is sure to steal your heart, as cleverly as its bandit characters snatch away loot!  As we’ve come to expect from NetEnt, its production values are high, its execution slick, and its slots play solid and entertaining.  Full steam ahead towards this brilliant slots title!