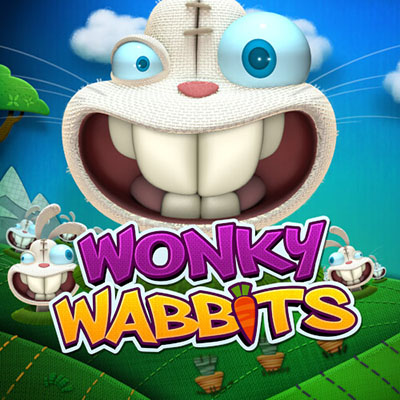 If your nose is twitching, it’s probably due to the smell of delicious fresh veggies served on a bed of crisp, cool cash, in NetEnt’s yummy Wonky Wabbits online slot game. Welcome to this unusual patch of fresh green countryside, which is populated by some truly eccentric bunnies. In digging their network of burrows, it seems as though they’ve struck it rich, as they are keen to give away lots of cash to the lucky player.

NetEnt were established in 1996, and have forged their reputation worldwide as one of the leading online slots developers. Their games are instantly recognisable by their cinematic quality, and incredible attention to detail. Their vast library of slots games includes themes of all kinds, and games both simple and complex, but all titles are united by their immersive themes, creative bonus features, and expert in-game storytelling. Some other NetEnt titles include:

The artwork in this game is quirky and unique. The background to the reels is a landscape of fields, trees and mountains, with a blue sky and clouds in the distance and a carrot field in the foreground. All these details are illustrated as though they are sewn from cloth. The 5 reels and 3 rows offer 15 paylines, and the reels, too, look as though they are embroidered on green fabric. The game screen is never boring, and from time to time, eccentric-looking rabbits pop out from holes in the background, and cute little birds fly across the reels.
The symbols on the reels include veggies in the style of fabric patches, such as ears of corn, broccoli florets, and large red tomatoes.
Bonus features include:
The animations make this game especially fun. For Duplicate WILDS, crazy bunnies will pop their heads out of the symbols. Big Wins are particularly exciting, with a spectacular animation in which rabbits peep out from the sides of the screen, and the accumulating win displays on the screen in large numbers.
You can set up to a massive 1000 Autospins with the Autoplay feature, meaning you can expend minimal effort on nice long playing sessions. Advanced Autoplay features also let you set handy loss limits.
The layout of the screen is bold and clear, with large buttons below the reels for spins, Autoplay, Max Bet and Coin Value.

Hop on down to experience this funny and rewarding NetEnt title! This game is as simple and wholesome as a crunchy carrot, with minimal bonus features meaning the interesting Duplicate WILD bonus takes centre stage. This is a one satisfying game to sink your teeth into!